KBO braces for most competitive FA market of all time

KBO braces for most competitive FA market of all time 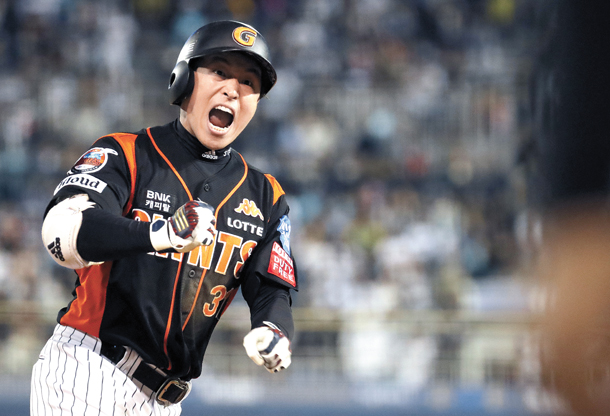 Son Ah-seop celebrates after hitting a two-run home run during a playoff game against the NC Dinos at Masan Baseball Stadium on Oct. 11. [YONHAP]

Now that the 2017 Korea Baseball Organization (KBO) season has officially come to a close, Korea’s top clubs are gearing up for what is expected to be one of the most competitive Free Agent markets ever.

Over the next week the KBO will announce the list of qualified players and registration will open. Finally, on Nov. 8, the FA market will officially open and negotiations will begin between clubs and players. The KBO is introducing a new rule this year that forbids a player’s most recent club from taking priority in negotiations, meaning the scouting war this year is expected to be far more competitive than ever before.

A total of 22 players in the KBO are qualified to become FA players this year, but it’s unlikely that they will all register as there is no guarantee they’ll get a better offer as an FA than if they renewed their existing contract. Last season, Lee Ho-jun of the NC Dinos, Lee Woo-min of the Lotte Giants and Kim Seung-hye of the Doosan Bears chose not to register themselves as FA players.

Not only has the system changed, but this year’s list of potential FA players contains an unusually large number of big names, including Son Ah-seop of the Lotte Giants. Throughout Son’s eight seasons with the Giants, he has managed to get a batting average over 0.300 every season and is ranked second among the active batters in the KBO, with a career batting average of 0.325. In the past two seasons he has played in every game and this season was his best of all, locking in 20 home runs and 20 stolen bases to join the prestigious 20-20 club.

Signing the top FA player had always been the biggest goal for KBO clubs, and the last few seasons have proven that paying out for the best does pay off. In 2014, the Doosan Bears signed Chang Won-jun and in his first year the Bears won the Korean Series. This season, the Kia Tigers also benefitted from the addition of Choi Hyoung-woo, winning the regular season and the Korean Series.

Due to this, Son is expected to get a lot of offers from other KBO clubs. But the offers are likely to expand to the foreign leagues. On Oct. 28, Son was asked for a status check from the major leagues, which means at least one MLB club is interested in recruiting him.

MLB Trade Rumors, an online clearinghouse for baseball free agent and trade rumors, introduced Son on their website on Wednesday saying, “He’s been compared to Nori Aoki in terms of skill set: limited power but excellent bat-to-ball skills and above average speed.”

After the playoff against the NC Dinos, Son is resting, still considering his options between staying in the KBO and moving to the foreign league.

The FA market has always been about the money. The players hope to find a club that can meet their needs while the clubs are looking for a player that can agree to a reasonable decision. It is certainly true that Son is the best player in the FA market this season, but it is uncertain if KBO clubs will give the offer he is looking for due to the FA market having a lot of outfielders.

In addition to Min Byung-hun of the Bears, Lee Yong-kyu of the Hanwha Eagles and Kim Joo-chan of the Kia Tigers, there’s a possibility that Kim Hyun-soo will return to the KBO as an FA player. If there is one too many candidates in one position, Son’s price is likely to get lower.

“I don’t plan on my advancement to foreign leagues as a negotiation tool,” Son said. “Since it is an important time for my career, I need to be serious about it. I dreamed of playing in the major league.”

Once Son starts negotiations with a major league club, it is likely the process will take a long time. Last year, it took Hwang Jae-gyun a month after the winter meeting for him to sign with the San Francisco Giants.

Due to this reason, Son’s decision will have a direct impact on the local league. The Lotte Giants desperately need to renew their contract with Son. Not only that, they’re also likely to spend a lot to keep Kang Min-ho, the Giants’ catcher for the past 14 season who will become an FA player.