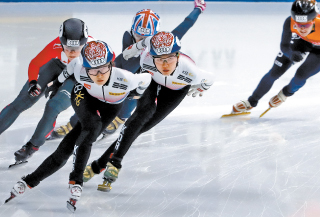 “I’m glad to see a great result, which I wasn’t expecting,” Choi said after the race. “Since it was the last event in Korea before the Olympics, I paid a lot of attention. I’m happy to see good results. I’m thankful that so many fans visited and cheered for us.”

Choi left a significant impression after winning the World Championship overall title for back-to-back seasons in 2015 and 2016. But in February, Choi wasn’t able to win a medal in any of the events, as she gave away the chance of an automatic berth at the Olympics, which went to the best Korean finisher, Shim Suk-hee.

This season, Choi once again proved her ability as the best skater, as she won a total of six gold medals in four ISU World Cup events - one in the 500-meter, two in the 1,000-meter and three in the 1,500-meter race.

And Shim, who won a silver medal on Saturday in the women’s 1,500-meter race, failed to add another individual medal on Sunday. Shim was second during the final women’s 1,000-meter race, but finished last among the five skaters, as she fell after crashing into Kim Boutin of Canada.

At the last women’s event of the weekend, the women’s 3,000-meter relay team - Shim, Choi, Kim Ye-jin and Kim A-lang - won a bronze medal at 4:18.487, 6.45 seconds behind the Netherlands. Korea maintained their second to third position throughout the race, but with only six laps remaining, Korea fell to last after Kim Ye-jin fell after getting bumped by China’s Guo Yi-han. Though Korea finished last among the four relay teams, they still won a bronze as China got disqualified.

Following a silver medal in the men’s 1,500-meter race, Hwang Dae-heon won another silver in the men’s 1,000-meter on Sunday. As the only Korean skater in the final, Hwang had an intense competition for the lead against Wu Da-jin of China and Samuel Girard of Canada. But from Shaolin Sandor Liu of Hungary’s last-minute burst, Hwang ended up finishing second, .142 of a second behind Liu. Seo Yi-ra and Lim Hyo-jun weren’t able to compete in the final, getting disqualified in the semifinals and quarterfinals, respectively.

Despite a poor performance in the event so far this season, the men’s team finally struck gold in the 5,000-meter relay race. The team of four - Kim Do Kyoum, Lim Hyo-jun, Seo Yi-ra and Kwak Yoon-gy - finished their race in 6:47.365, .136 of a second ahead of the Netherlands.

After losing the lead to the Netherlands with 13 laps remaining, Seo quickly brought back Korea’s lead and with a last minute spurt, Korea outpaced the Netherlands for their first gold in the men’s relay race. Prior to the event on Sunday, Korea finished fourth and second at the first and the third ISU World Cup men’s 5,000-meter relay race.