Skeleton star picks up 1st gold medal of the season

Skeleton star picks up 1st gold medal of the season 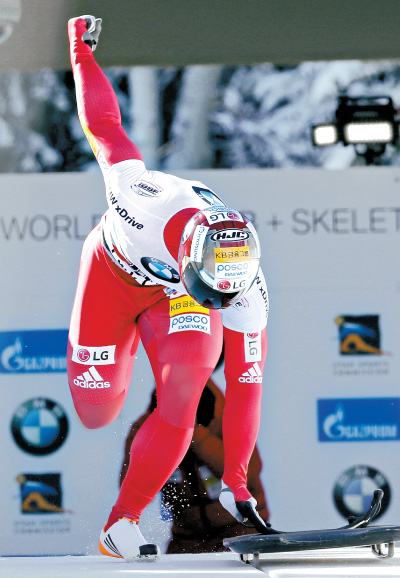 Yun Sung-bin picked up his first win of the season at the BMW International Bobsleigh & Skeleton Federation (IBSF) World Cup in Park City, Utah on Saturday.

Yun finished the event with a combined time of 1:27.32, 0.63 seconds ahead of Martin Dukurs of Latvia. Dukurs finished runner-up with 1:37.95 and Axel Jungk of Germany finished third with 1:38.07. In addition to his second medal of the season, this is Yun’s third gold medal in his BMW IBSF World Cup career.

From the start, Yun had the perfect race. He had the best start time in both races, at 4.51 seconds and 4.52 seconds. Not only that, Yun maintained the lead in both races, finishing with the time of 48.82 seconds and 48.50 seconds, setting the course record at the Park City track.

This is the first time since December 2016 in Whistler, Canada, that Yun has defeated Dukurs. Since this season will include the PyeongChang Winter Olympics in February 2018, Yun’s victory over Dukurs has raised hopes for Korea’s chance of winning its first Olympic gold medal in the sliding event.

After finishing runner-up by losing to Dukurs by 0.01 second at the final BMW IBSF World Cup at the Alpensia Sliding Centre in Pyeongchang in March 2017 last season, Yun worked harder than anyone in the offseason to defeat Dukurs, who won 48 gold medals at the BMW IBSF World Cup races throughout his career.

“I thought of them as minor mistakes, but I learned that they were very big mistakes when I was preparing for this season,” said Yun.

Following the loss, Yun raced down the track at the Alpensia Sliding Centre eight times a day and finally, in the second race of the season, he defeated Dukurs. The two have a large gap in their professional careers, as Yun, considered new to the field, only started in 2012 and Dukurs is a veteran who has been competing since 1998.

Although Yun finished 16th at the 2014 Sochi Winter Olympics, he slowly made his way up the ranks and won his first gold at the seventh BMW IBSF World Cup in February 2016 in St. Moritz, Switzerland. After the 2016-17 season, his fourth year competing, Yun rose to second in the world ranking, right behind Dukurs.

Now, Yun is in the lead for the season’s ranking at 435 points and his head-to-head record against Dukurs has improved to four wins and six losses. Yun will start the third BMW IBSF World Cup event in Whistler, Canada on Nov. 26.