Chong Tae-hyon, responsible for the gold medal-winning double play ball against Cuba at the 2008 Beijing Olympics, announced his retirement on Wednesday after 17 professional seasons. 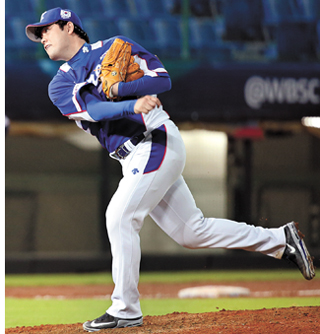 Chong Tae-hyon pitches against the United States during the 2015 WBSC Premier12 at Tokyo Dome. [YONHAP]

The 39-year-old submarine pitcher told Yonhap News Agency his health would no longer allow him to pitch in the Korea Baseball Organization (KBO). His last KBO game was with the Lotte Giants in 2016, and he only made 10 appearances for the Giants’ affiliate in the Futures League, the KBO’s minor league.

“Since I couldn’t be of any help to the club, I thought I’d be better off retired,” Chong said, adding he’d informed the Giants before they set up their 40-man roster for protection from the annual secondary draft Wednesday.

Chong is considered the greatest submarine pitcher in KBO history, but the reliever also made his mark in international competition.

Chong’s defining moment came in the gold medal game against Cuba at the 2008 Olympics. With Korea clinging to a 3-2 lead, Cuba loaded the bases with one out for future major leaguer Yuli Gurriel. Chong got him to hit into the game-ending 6-4-3 double play, lifting Korea to its first Olympic gold in baseball.

“Every game that I played wearing the national flag has been a huge honor,” Chong said. “I am happy that fans still remember those moments fondly.”

He signed a free agent deal with the Giants before the 2012 season.

Before joining the Giants during the 2011 offseason, Chong engaged in contract talks with the Baltimore Orioles, who reportedly offered him a two-year contract worth $3.1 million with a spot on the 40-man roster, but the pitcher failed a physical.

He started experiencing some knee and elbow issues during the 2016 season, during which he was limited to 17 1/3 innings across 24 appearances.

Chong said even though he’ll stop playing, he will not leave the game of baseball entirely.

“I’ve never once thought about doing anything not related to baseball,” Chong said. “I’d like to become a coach and stay connected to baseball and to fans that way.”