Park Byung-ho, formerly of the Rochester Redwings Class AAA, a minor-league affiliate of the Minnesota Twins, has concluded his major league career and announced his return to the Nexen Heroes on Monday. After two seasons playing in the big leagues, the Heroes signed a one-year contract at 1.5 billion won ($1.38 million). 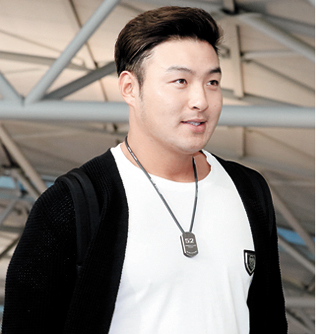 Park Byung-ho at Incheon International Airport on Feb.2, before leaving to join the Minnesota Twins for spring training. Park rejoined his former club, the Nexen Heroes, on Monday. [YONHAP]

“There are disappointments in my past two seasons, but I don’t have any regrets,” Park said. “It was a good experience and it was an opportunity for me to develop as a better player.”

If Park had seen out his contract with the Minnesota Twins, due to expire at the end of the 2019 season, he would have taken home another $6.5 million over the next two seasons including a $500,000 buyout option. He opted to turn down the money and asked to be released in the hope that he would get to play more if he returned to the Korea Baseball Organization.

Park made his KBO debut in 2005 with the LG Twins. Despite high expectations, getting drafted in the first round, Park didn’t perform in his rookie season, recording a 0.190 batting average with three home runs and 21 RBIs in 79 games. Park continued to struggle for the next three years with the LG Twins - his highest batting average was 0.218 in 2006 after playing in only 48 games.

Once he was traded to the Heroes in July 2011, Park was like a whole new player, winning the home run title in four consecutive seasons from 2012 to 2015, two MVP Awards and three Golden Glove Awards. Not only that, Park managed to exceed 50 home runs in two consecutive seasons in 2014 and 2015, becoming the KBO’s top slugger.

After a successful 2015 season, Park signed a five-year contract with the Minnesota Twins at $12 million, including a $12.85 million posting fee to the Nexen Heroes. At the beginning of the season, Park received a lot of attention in the major league with some big home runs.

But the attention didn’t last long, as it quickly became clear that what Park had in power, he seriously lacked in accuracy. Throughout the 2016 season, he was given 28 walks and was struck out 103 times, more than four times the average. The high number of strikeouts was considered Park’s weakness - he was struck out 80 times and walked 21 times during the three months he played in the major leagues.

“From the time I decided to head to the major league two years ago and to return back to the KBO, I got a lot of help [from the Heroes],” Park said. “I’m truly thankful. Now that I’ll be playing for my home team, I want to play better in front of the fans. I’ll try my best to help the team play in the postseason.”

Though Park gave up the financial benefits, getting more playing time in the KBO will benefit his career, as he will be a free agent after two seasons. Since Park will be 33 years old in 2020, playing full time in the KBO is more likely to raise his value as an FA than if he continued to struggle in the United States for another two years.