Curlers still have no place to train

Curlers still have no place to train

With the clock ticking down until next year’s Winter Olympic Games at home, Korean curlers remained unsure on Monday just where they’d be training after the turn of the month. 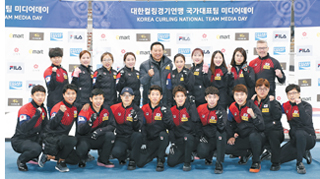 The Korean national men’s, women’s, and mixed curling teams pose for a photo during the national team media day at Gangneung Curling Centre in Gangwon on Tuesday. [YONHAP]

The Korean men’s, women’s and mixed doubles teams set to compete at the 2018 PyeongChang Winter Games assembled at Gangneung Curling Centre in Gangneung, some 230 kilometers (112 miles) east of Seoul in Gangwon, for the media day. An occasion such as this usually provides a stage for Olympic athletes to lay out their goals and discuss their medal hopes. But the frustrated curlers on this day were busy taking shots at their sport’s administrative officials for their inadequate work.

The teams are training at Gangneung Curling Centre for the time being, but PyeongChang’s organizing committee will shut down the venue in December for some last-minute tests before the Feb. 9-25 Olympics.

What little home ice advantage that the Korean teams could have enjoyed is gone. In particular, the men’s team only returned home last Tuesday from a competition in Canada, and practiced at Gangneung for the first time Monday.

Kim Min-jung, head coach of the women’s team, said the training site for December has not been determined. The curlers will move into Jincheon National Training Center in Jincheon, some 90 kilometers south of Seoul, but the curling facility there isn’t finished.

“We heard one option is to train at the curling facility for the Paralympic athletes in Icheon [some 50 kilometers north of Jincheon] after we move into the training center,” Kim said. “But we don’t know if the ice quality there meets the international standard. It’s just a very difficult situation.”

Kim Young-mi, a member of the women’s team, said the uncertainty surrounding the practice venue has been so distracting that “we’ve not been able to concentrate on technical training.”

It hasn’t helped the curlers that their national governing body, the Korea Curling Federation, has been under the management of the Korean Sport & Olympic Committee (KSOC) since August for its administrative paralysis due to a leadership vacuum.

The federation has scrambled to schedule a competition next month in a different province, but the curlers believe nothing would top hosting an international competition at Gangneung Curling Centre.

“The ice surface is different when the stands are packed for competitions,” Kim Min-jung said. “And we also have to be prepared for situations when the crowd noise comes into play. To do that, we have to have some simulated matches.”

“We may make some good shots now, but there’s no guarantee we could do the same in a packed house,” she said. “We need a week’s worth of competition more than we need 20 days of practice. I am just worried that I can pull off the same shots in the Olympics.”

“As the coach, I have to manage the team and run practices, and I also have to handle all the administrative work,” Jang said. “I understand we shouldn’t be asking for too much, but we just hope for some improvement.”

Lee said he got into some hot water when he voiced his displeasure at the previous national team media day in August, and added he was still appalled that there had been very little improvement over that time.

Lim Myung-sup, the men’s head coach, said it’s up to the athletes to do the best they can under the circumstances.

“If we can just help each other and do our best until the Olympics, then hopefully we can live up to people’s expectations,” Lim said. “We just have to stay focused on our task at hand.”