Yoo Sang-chul, a member of the Korean team that made the semifinals in the 2002 FIFA World Cup, was named the new head coach of the Jeonnam Dragons on Monday. The terms of his contract were not revealed. 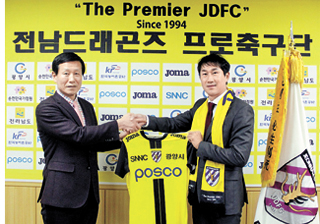 “We selected Yoo because we need a leader with pro football leadership experience,” the K League Classic club said in a statement. “We were also looking for a young and energetic coach who could communicate with our players.”

The Dragons recently decided to part ways with Roh Sang-rae, who had led the club since 2014.

Under Roh, the team finished fifth place in the 12-team Classic league last year, but this season, they barely escaped the relegation zone after taking 10th place with 8 wins, 11 ties and 19 losses.

Yoo will return to the Classic for the first time in five years. He previously managed Daejeon Citizen for two seasons before leaving the club at the end of 2012 after his contract expired. The 46-year-old then coached at the University of Ulsan starting from 2014.

“I’ll start off with a clean slate to prepare for the next season,” he said. “Since they gave me this job with trust, I will do my best to meet our fans’ expectations and earn good results.”

Yoo, who made his professional debut with Ulsan Hyundai FC in 1994, is considered one of the top Korean footballers of his generation. He was the fourth Korean football player to have his name registered into the century club, and in the K League, he was the leading scorer in the 1998 season.

Known for his versatility in a range of positions from defender to forward, Yoo played for Ulsan Hyundai FC in the Classic and Japanese clubs like the Yokohama Marinos and Kashiwa Reysol. While there were only eight games remaining in the season, Yoo returned to Ulsan in 2002 and helped the club to a runner-up finish in the K League Classic regular season. In the eight remaining matches, Yoo scored nine goals for Ulsan.

Yoo has also left quite an impression on the international stage, making his Korean national team debut in a friendly match against the United States in 1994.

In 124 matches Yoo played for the national team, he scored 18 goals. In World Cup matches, Yoo scored two goals, one of which helped in Korea’s 2-0 win over Poland in the 2002 World Cup group stage and one against Belgium at the 1998 World Cup in France.