From left: Dustin Nippert, formerly of the Doosan Bears, Eric Hacker, formerly of the NC Dinos, Hector Noesi of the Kia Tigers and Josh Lindblom of the Bears. [JUNG SI-CHONG, YANG GWANG-SAM]

Despite what promised to be an exciting Free Agent market in the KBO this off-season, it’s the foreign players, not the FAs, who have been stealing the headlines. With a number of famous faces not offered a spot next season, KBO clubs are shifting toward younger foreign players that can be developed in the domestic league. 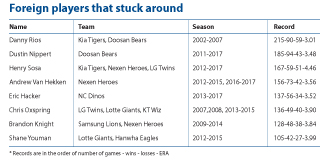 Those foreign players that are lucky enough to remain in the KBO need to have a competitive edge. Being the best at something can definitely secure a player’s contract for the next season, although it does raise expectations.

Esmil Rogers returns to the KBO this season after a year in the United States. Rogers left a significant impression in his rookie season with the Hanwha Eagles with his 150 kilometer (93 mile) an hour fastball. Despite a recent elbow surgery, the Nexen Heroes decided to risk signing Rogers for the upcoming season, but the pressure will be on for him to prove his worth.

Pat Dean of the Kia Tigers has an ERA in the 4.00s, but his fastest pitch is recorded to be 150 kilometers per hour. With such a fast pitch, the fans are expecting to see more from Dean in his second season in the KBO, as the first season is considered an adjustment period.

Hector Noesi of the Kia Tigers and Henry Sosa of the LG Twins were successfully re-signed. Both are hard-throwing right-handed pitchers.

Foreign players also require potential. Rather than considering the domestic league to be a stage to learn and develop, they tend to do their own thing. But there have been players that flexibly took the advice of domestic coaches and made their way up to be top players.

The Lotte Giant’s Brooks Raley is a great example of a foreign player developing in the KBO. During his debut season in 2015, the pitcher had more weaknesses than strengths, being significantly weaker against right-handed batters. In his second season Raley wasn’t able to do much better, finishing the season with eight wins and ten losses with a 4.34 ERA.

But last season, Raley became the Giants’ ace pitcher. In 13 games during the second half of the season, Raley picked up seven wins and no losses, thanks to the swing change by head pitching coach Kim Won-hyong. By decreasing the speed of certain types of pitches and maintaining his pitching form, Raley had a greater change of pace between fastballs and change-ups.

In addition, Raley improved his game management, as 2017 was his third season in the KBO. Thanks to Raley’s improvement, the Giants now see him as a top player - his contract exceeded a million dollars for the 2018 season.

Henry Sosa of the LG Twins is another developing player. In his rookie season with the Tigers in 2012 he was a pitcher who could throw at great speeds. Over the last few years he has learned different types of pitches and this season he has shown considerably improved control. The KT Wiz’s Ryan Feierabend is a strong pitcher after learning to thrown a knuckleball. Though the speed of his pitches is considered average, batters find it difficult to connect, giving him the KBO’s lowest ERA at 3.04.

At times, the club’s management affects the position of foreign players too. Upon completion of the 2016 season, Raley was in danger of getting released from the Giants due to his average record. But when Josh Lindblom gave up his contract to leave to the United States due to a personal problem, Raley was able to retain his position as the Giants’ roster.

On the other hand, Eric Hacker of the NC Dinos failed to re-sign with the club, even though he had an average record of 12 wins and seven losses with a 3.42 ERA. This was because manager Kim Kyung-moon wanted a younger pitcher on the team to pitch more innings. Similar reasoning applied when the Doosan Bears parted ways with Dustin Nippert. As they have been focusing more on investment efficiency, they decided to choose a more consistent player than Nippert.