Lee has hope for women’s football

Lee has hope for women’s football 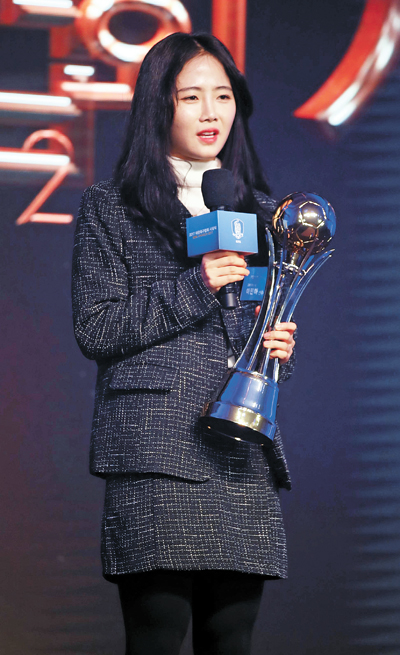 Lee Min-a, a midfielder for the Korean women’s team, speaks after receiving the KFA Female Football Player of the Year Award. [YONHAP]

Lee Min-a, a midfielder for the Korean women’s team, said Tuesday that she wants to contribute to the development of women’s football by helping the national team earn good results at international tournaments. 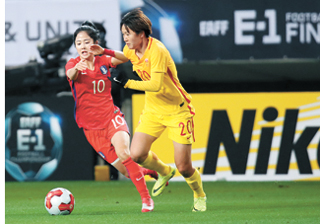 Lee Min-a, in red, competes for the ball during a EAFF E-1 Championship match against China on Dec. 15. [YONHAP]

The Korea Football Association named Lee its female football player of the year on Tuesday. It is the first time she has earned the title.

The 26-year-old, who has six goals in 38 caps, helped Korea qualify for the 2018 Women’s Asian Cup. In the domestic WK League, she led the Incheon Hyundai Steel Red Angels to the crown by scoring 14 goals and delivering 10 assists in 28 matches.

“I will become a better player with this award,” Lee told reporters after the awards ceremony. “I will do my best next year to play better.”

Lee said she wants to help the development of Korean women’s football but acknowledged that the team will face tough challenges.

The 2018 Women’s Asian Cup in Jordan doubles as the regional qualifier for the 2019 Women’s World Cup in France. The top five teams among eight nations at the Asian tournament will punch their tickets to the women’s showpiece event.

“It’s going to be tough next year, but it’s something I need to overcome,” she said. “We want to do well at the Asian Cup and earn the ticket to the World Cup.”

“I want to congratulate the men’s team on winning the title, but for me, I wasn’t feeling good because we performed bad,” she said. “I’ll not forget this and will give utmost effort to develop women’s football.”

Lee lamented that Korean women’s football is facing a difficult time. The WK League next year will only have seven clubs, after Icheon Daekyo disbanded.

“It’s a pity that the team disbanded,” she said. “For the sake of Korean women’s football, I think the national team needs to perform better and leave a good impression on young children so they will start playing football.”

Lee will play for the Japanese club INAC Kobe Leonessa starting next year. It will be her first time playing overseas.

“I have big expectations because I like their style of play,” she said. “Other players told me to never lose on the pitch.”