Starting with the signing of left back Park Joo-ho, Ulsan Hyundai FC is working hard to sign new players for the upcoming season. 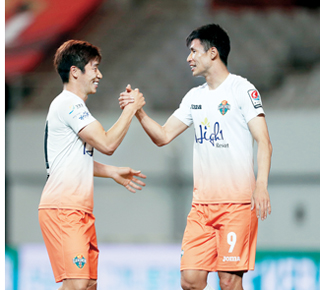 Lee Keun-ho, left, and Jung Jo-gook of Gangwon FC celebrate after scoring a goal during a K League match against FC Seoul at Seoul World Cup Stadium in May. [K LEAGUE]

The addition of the former Borussia Dortmund’s left back may have been the start for Ulsan, as they are expanding their recruitment process. Ulsan’s effort reflects its hope to end Jeonbuk Hyundai Motors’ dominance in the K League Classic.

Now that the team has earned their berth once again by winning the Korean FA Cup after defeating Busan IPark FC with a 2-1 aggregated score on Dec. 4, they are making changes to the roster, hoping to become a team that can do well at the 2018 AFC Champions League. To do so, they are focusing on signing more players.

“Just participating at the ACL doesn’t mean anything,” said Ulsan’s head coach, Kim Do-hoon, after winning the FA Cup. “We’ll fight to win. To do so, we need about four players who have national team experience. Currently, Ulsan doesn’t have any national team players. The only solution is to bring in more players.”

Now that Ulsan signed Park, the club is focusing on bringing in a striker. Last season, Ulsan struggled with its striker, having a comparatively low number of goals scored. As Ulsan’s main striker, Lee Jong-ho, will be absent until the beginning of the season due to a calf injury, they are in urgent need of a striker.

While Ulsan is in negotiations with Hwang Il-su of Yanbian Funde FC, Lee Keun-ho of Gangwon FC has been consistently brought up as a possible candidate. Lee showed great energy and determination on the field during the Korean national football team’s friendly matches against Colombia and Serbia in November. Though Lee is considered one of the best strikers in the K league, it is unlikely Ulsan and Lee will come to an agreement, as Gangwon suggested a high transfer fee.

Among Ulsan’s possible candidates, Jung Jo-gook of Gangwon FC is another favorable striker. Once Jung transferred from FC Seoul to Gwangju FC in 2016, he won the K league’s scoring title and MVP award. After a successful season with Gwangju, Jung changed his uniform once again to Gangwon. Though Jung concluded the season with seven goals due to an injury, he is still considered the K league’s top striker.

For Ulsan, Jung is a lot more appealing than the two other players, as he has plenty of ACL experience.

But Jung’s transfer is uncertain. Since Jung and Lee are Gangwon’s star players, Gangwon has come up with overwhelmingly high transfer fees to prevent Ulsan from taking the two players.