The KPGA Tour schedule underwent few significant changes this year, but one was big enough to attract a lot of attention: co-hosting more tournaments with the Asian Tour. 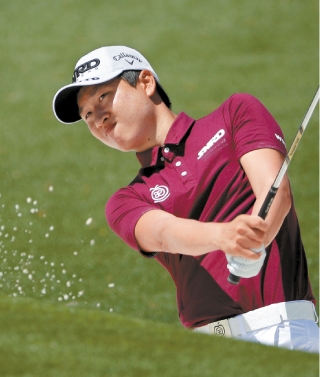 Starting in 2018, two tournaments - the Korean Open and Maekyung Open - will be co-hosted with the Asian Tour. Including the Shinhan Donghae Open, that brings the total of co-hosted KPGA Tour to three.

Since the Asian Tour is considered a more global circuit compared to the KPGA and Japan’s JTGO, the co-hosted tournaments will provide greater opportunities for players to advance to major tours like the PGA. The Japan Golf Tour will co-host four tournaments with the Asian Tour.

The increase in number of tournaments co-hosted with the Asian Tour is great news for players in Korea and Japan. To retain their status on the Asian Tour, players have to participate in at least seven tournaments throughout the season. The expanded partnership with the KPGA and JTGO will make it easier for golfers in those countries to meet the requirement.

There’s another bonus. On the Asian Tour, players can retain their status for next season if they finish inside the top 60 on the season’s money list, and since the KPGA and JTGO tournaments give out more prize money, it will be that much easier to achieve. Kim Ki-hwan, for example, finished 59th on the 2017 Asian Tour money list by finishing sixth at the Shinhan Donghae Open and having three top-20 finishes from eight Asian Tour events.

Although the Asian Tour is not as competitive as the European Tour or PGA, they give out a lot more world ranking points compared to regional tours in Asia. Not only that, the tour doles out many more benefits to champions. The winner of a tournament automatically receives a berth to compete in major tournaments and the World Golf Championships series.

In addition, the top three players in the season’s money list will receive an opportunity to compete in the World Golf Championships series as well as two PGA Tour events being played in Asia - the CIMB Classic and CJ Cup.

Of the Korean golfers playing on the Asian Tour, Wang Jeung-hun has benefitted the most, as he got to the big leagues through the Asian Tour.

On the Asian Tour, Wang consistently earned world ranking points, and by winning his first European Tour event, the Trophee Hassan II in May 2016, which he played on a sponsor exemption, Wang successfully earned status on the European Tour.

Then, in the following week, Wang won another tournament, the AfrAsia Bank Mauritius Open co-hosted by the European Tour, Sunshine Tour and Asian Tour. This led Wang to win the 2016 Sir Henry Cotton Rookie of the Year.

A victory at the Commercial Bank Qatar Masters last January has given Wang three wins in his short European Tour career. By moving up the world ranking through the European Tour events, he was able to compete in all four major tournaments in 2017.

From the benefits of playing on the Asian Tour, more Korean players are participating at the Qualifying School Final Stage presented by Sports Authority of Thailand, scheduled to start on Jan. 11.

Among the Korean golfers, Ryu Hyun-woo, the only player to have won a JTGO Tour event last season, will be one to watch in the final stage.