Park In-bee talks about family, dogs and her return to professional golf

Park In-bee talks about family, dogs and her return to professional golf

After her LPGA season was cut short last year by a finger injury, Park In-bee is back this year with a vengeance. 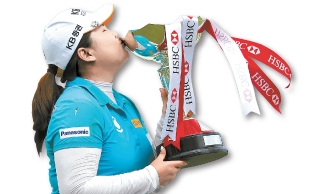 The 2017 season turned out to be her second-briefest yet, as the former No. 1 golfer played in just 15 LPGA Tour events. In 2016, she was felled by a similar finger injury and participated in only 10 tournaments that year.

Instead of playing professional golf, Park, 29, spent the past year with her family and pet dog Rio, which her husband gifted to her after she won Olympic gold at Rio 2016.

“Before, I only stayed for about two to three weeks and had to leave for tournaments,” Park said. “But in 2017, there were times when I stayed in Korea for more than a month. This allowed me to experience daily joy with my family, including Rio. It might be an everyday thing to others, but they were very special for me.”

After spending a majority of 2017 with her family, Park is ready to return to life as a professional golfer. She will be leaving for the United States this month for offseason training.

“Rather than rushing, I’ll take one thing at a time and find a goal within that,” Park said. “Winning is definitely one of those goals.”

At 27, Park became the second-youngest golfer to capture a career Grand Slam in 2015 and the youngest inductee into the LPGA Hall of Fame. She followed the next year with a gold medal at the Rio Olympics, where golf returned to the Games for the first time since 1900. With so many achievements early in her career, she admits setting even greater goals is difficult.

“But rather than losing all my energy,” she said, “I think it’s important for me to maintain myself at this level. I think my mind-set and energy are more important than the result.”

She may be losing some of her youthful luster, but certainly not her ambition. Out of all the LPGA events, Park has chosen major tournaments as the ones she’s most willing to win.

She also mentioned getting back up on top of the world ranking, emphasizing that she’d like to finish toward the upper echelons of the leaderboard than somewhere in the middle.

And since Park is turning 30 this year, she believes it will be a new life for her.

“When I started competitive golf, I thought to myself that I would spend my 20s as a professional golfer and my 30s doing something else,” Park said. “But my 20s have passed; I think I’ve worked hard. My 30s will be another turning point; it’ll be the start of a new life.”

Park will begin her 2018 season at the HSBC Women’s Champions as a title defender.