After two seasons of playing in the major leagues, Park Byung-ho finally made his return to play in the KBO on Tuesday. 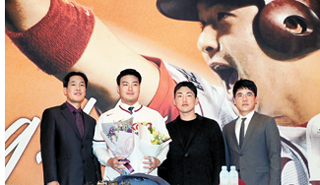 “Two years ago, I left to the United States with big goals,” Park said during a press conference at the Grand Hyatt in Incheon on Tuesday. “During the first season [2016] I struggled with an injury. Last year, I challenged myself once again with a new mindset, but I stayed in the minor leagues, which was very difficult. I’ll forget about the hard time and work hard to see good results.”

Having won the KBO’s home run title and the RBI title from 2012-15, Park is considered the league’s best slugger. After the 2015 season, Park signed a four-plus-one-year contract with the Minnesota Twins through the posting system at $12 million. Despite high expectations, Park’s major league career wasn’t all about the success he had in the KBO. At first, Park received a lot of attention for his home runs, but as he competed in more games he started to fall behind other batters, showing his weakness against fastballs.

An ill-timed injury saw Park demoted to the minors in his rookie season after a disappointing major league record of a 0.191 batting average, 12 home runs and 24 RBIs in 62 games.

Park once again raised expectation by playing well in the exhibition games, but had to conclude his season without getting called-up to the majors. As a result, when the season ended Park gave up his remaining two seasons with the Twins to return to his former KBO club.

“I spent more time in the minors than the majors, but I got to meet a lot of great players, which I didn’t experience in Korea,” Park said. “I left to the majors to play against better players. I didn’t get good results, but it was a valuable experience to play with the players I always wanted to.”

Though Park was guaranteed to receive at least $6.5 million if he stayed with the Twins, the 31-year old agreed to join the Heroes at 1.5 billion won ($1.4 million).

“Now, I feel as comfortable as if I’m back home,” Park said. “I am a little concerned about not having played in the KBO for the past two seasons, but I believe that I’ll quickly adjust.”

With the return of Park to the Heroes, the KBO is expecting an interesting season this year. The Lotte Giants’ crowd increased by 22 percent when Lee Dae-ho returned to the team last season - the Heroes are hoping to see something similar this season.

Of the returning players, Park is most likely to attract fans to both home and away games. Once the Heroes announced Park’s return in November, KBO fans have already started speculating on who will take the home run title this season.

Since Park left the KBO, Choi Jeong of the SK Wyverns has been the favorite, winning for two consecutive seasons.

“In the past two seasons, SK’s Choi and foreign players had been competing for the home run title,” Park said. “I want to be in the home run race and excite the fans. I don’t have a set number for home runs.”

In the games against the Kia Tigers, Park will have an interesting match-up against the Tigers’ ace pitcher, Yang Hyeon-jong. When Park was in the KBO he dominated against Yang, recording a 0.556 batting average.