The next Kim Yuna waits her turn

The next Kim Yuna waits her turn 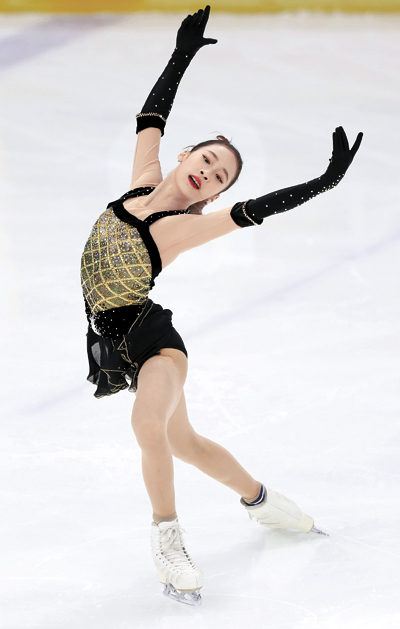 You Young skates her short program at the Korea Figure Skating Championship at Mokdong Ice Rink in Seoul. [YONHAP]

You Young is Korea’s best female figure skater. At the national championship, considered the final qualifier for the PyeongChang Winter Olympics, earlier this month, she finished first in ladies’ single with a combined score of 204.68 points. She was the second Korean skater after the venerated Kim Yuna to score more than 200. 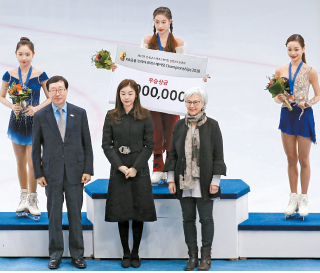 From left: Choi Da-bin, You Young and Lim Eun-soo stand at the podium after the Korea Figure Skating Championship at Mokdong Ice Rink in Seoul on Jan. 7. [YONHAP]

But You will not be going to the Olympics because she is too young.

“I got to sleep well for the first time in a while,” the 13-year-old said. “I was very happy. Last month, I got a score of 197.56 points, so I thought it could be possible if I worked a little harder, but I was surprised to see my score exceed 200 points. I am satisfied now, but I want to be better.”

To compete in the Olympics, athletes have to be at least 15.

During the awards ceremony, You hugged Kim, who was presenting the award. For You, Kim was the reason she started figure skating. She was living in Singapore in 2010 when she saw Kim win the gold medal at the Vancouver Winter Olympics.


Until 2012, You trained by herself in Singapore, but the tropical climate made conditions less than ideal. She had to practice in public rinks and taught herself techniques by watching videos of Mao Asada and Kim because there were no professional figure skating coaches in Singapore.

To improve, You’s mother brought her to Korea in 2013. They only intended to stay two years. You’s father had a business in Indonesia, the oldest brother was in the Korean military and another brother was still living in Singapore. 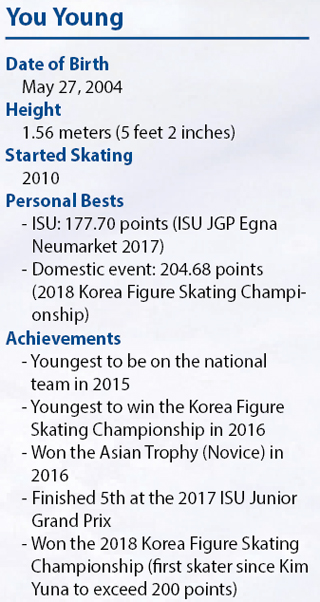 Since last year, You has been training in Canada at the Toronto Cricket Skating and Curling Club, where Kim trained for the Vancouver Winter Olympics. It was precisely the reason why You wanted to practice there.

In Canada, she improved her jumps under Coach Ghisland Briand. After a year of training, her mother noted, “Her jumps have gotten a lot better than before, when she didn’t seem to have much confidence in her jump.”

“It’s sad not being able to compete at the Olympics in my country,” You said. “I hope to watch the competition, even if I don’t compete.”

But since You will be preparing for the World Junior Figure Skating Championships, which start on March 5, it is uncertain whether she will have time to watch the Olympics on site.

You may not be competing in PyeongChang, but she did have an unforgettable memory at the Winter Games - as a torch bearer.

When the Olympic flame arrived from Athens on Nov. 1, 2017, You ran the first 200 meters (656 feet) on Incheon Bridge as the inaugural torchbearer for the PyeongChang Winter Olympics.

You will likely begin her Olympic career at the 2022 Winter Games in Beijing. She has even been studying Chinese in Canada to prepare for interviews.

“I’ll work hard until the Beijing Olympics and perform good jumps and spins,” You said, “just like Kim Yuna.”

Although she hopes to get high score with a “clean” performance, for now, You is hoping to leave no regrets with her performance and just wants to win a medal.

“Until then, I hope people cheer me on continuously,” You said.