For the first time in Korean men’s tennis history, Chung Hyeon will compete for his chance to advance to the quarterfinals at the Australian Open. Having defeated fourth-ranked Alexander Zverev Jr. of Germany in the round of 32 on Saturday, Chung will be facing world No. 14 Novak Djokovic of Serbia today at 5 p.m. 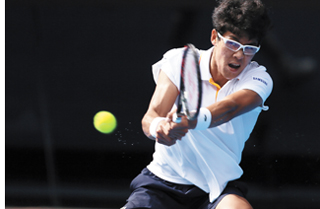 Chung Hyeon hits a return during the third round men’s singles match against Alexander Zverev of Germany at the Australian Open 2018 on Saturday. [XINHUA/YONHAP]

Though Chung was losing 2-1 until the third set, he won the fourth and fifth set for a 3-2 come-from-behind victory against the fourth-ranked player in the world, the first time he has won against a player ranked inside the top 10.

“I think we both played very good for four sets,” Zverev was quoted as saying on the ATP website. “I think the match was very high level.”

With the victory, Chung tied the record for the best finish in a major tournament by a Korean tennis player with Lee Hyung-taik, who advanced to the round of 16 at the 2000 and 2007 U.S. Open.

Chung’s advancement to the round of 16 has guaranteed him a winning prize of 240,000 Australian dollars ($191,755) and 180 points toward the world ranking. If Chung defeats Djokovic, he will earn 360 ranking points, which will allow the 21-year-old to get back inside the top 50 in the world ranking. Chung’s current world ranking is 58.

In 2016, Chung played against Djokovic, who was then the top-ranked player, in the first round of the Australian Open, but lost 0-3. At the time, Chung was only in his third year playing professionally on the Association of Tennis Professionals (ATP) World Tour.

But within two years Chung came a long way. In November 2017, Chung picked up his first professional win at the Next Generation ATP Finals.

“I’m just so happy to make the fourth round in [a Grand] Slam with so many good players,” Chung was quoted as saying on the ATP website. “I don’t want to stop here. [I want to] keep going.”

Up until last year, Chung was a player who didn’t have come-from-behind victories, partly because he lacked concentration and physical strength, so he couldn’t keep up. Throughout his professional career, Chung had a total of six come-from-behind victories, three of the matches won at the Next Generation ATP Finals. Before that, Chung struggled to concentrate until the end of matches, as he lost to 158th-ranked Guido Pella of Argentina by losing the last two sets at the Bavarian International Tennis Championships.

Now, he has demonstrated the ability to keep himself consistent for five sets, thanks to a month of offseason training in Thailand, where he focused on improving his strength, endurance and speed.

“We created a team of professionals, from an English trainer to a German therapist, and trained for four hours a day,” said Son Seung-ri, Chung’s coach.

Neville Godwin, who had been coaching Chung since last month, has been focusing on serves and strokes. Though Godwin only got as far as 90th in the world ranking in 1997, his coaching ability has been recognized, leading Kevin Anderson to a runner-up finish at the 2018 U.S. Open.

While Chung is on a roll, on the other side, Djokovic hasn’t fully recovered from an elbow surgery in July 2017. Currently, Djokovic’s ranking has dropped to 14th, as he took a break after the 2017 Wimbledon Championships in July. “When I played against Djokovic two years ago, the court seemed so big, but now it feels a lot smaller,” Chung said.

Chung’s match against Djokovic will be broadcast live on JTBC3 FOX Sports.