Hockey chief is ‘looking for solutions’ on joint team issue

Hockey chief is ‘looking for solutions’ on joint team issue

South Korean national hockey director Jim Paek said Monday that he is trying to “look for solutions, not problems” when it comes to the joint Korean women’s team at the upcoming Winter Olympics. 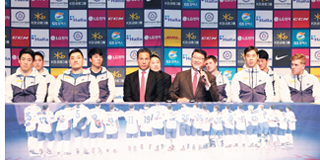 Paek, head coach of the men’s national team, who doubles as the national program director for the Korea Ice Hockey Association (KIHA), attended his team’s pre-Olympic media day at the Jincheon National Training Center in North Chungcheong, some 90 kilometers (56 miles) south of Seoul.

The unified Korean team for the PyeongChang Winter Games has been the hottest topic in the sport in recent weeks. The International Olympic Committee (IOC) announced last Saturday that 12 North Korean players will join the 23-player South Korean team, with a minimum three North Koreans to be included on the 22-player game roster.

The fast-developing situation - the Koreas agreed to form the joint team on Jan. 9 and the IOC ruled in favor of it just 11 days later - has divided South Korea. One side has cried foul, saying that the government unfairly forced the idea on unsuspecting players and thereby stripped them of an opportunity to play in the Olympics. Others have said the joint hockey team represents a step toward reconciliation on the divided Korean Peninsula, and keeping a few South Korean players out of some games is for a greater good.

Against this backdrop, Paek put on the hat as national team director momentarily during the men’s team’s press conference.

“When it comes to the North Korean-South Korean women’s team, there are so many angles where you can approach this; from the government’s side; how do the women feel? Or how do the people of Korea feel?” Paek said. “What I’d like to say is we look for solution, not problems. Whatever the issues are, we’ll find solutions and we’ll come together and do the best we can possibly do in that situation.”

South Korea’s women’s head coach Sarah Murray will remain as the bench boss for the unified team. With her team’s first game slated for Feb. 10, she’s stuck in an unenviable position of having to leave at least four of the players she’s coached over the last four years and select at least three North Koreans out of 12 after training them for only a couple of weeks.

Asked if he has offered any advice to Murray, Paek said it’s ultimately up to her to make the calls on her team.

“She is a very strong woman who has a great hold on her team,” Paek said. “We have conversations because she has her ideas and I have mine. But it’s her team at the end of the day. I think she has a great handle on the situation and on how she’s going to approach these things.”

North Korea will send 22 athletes in total to Pyeongchang, with short track speed skating, cross-country skiing and figure skating being the other sports. The athletic delegation is scheduled to arrive on Feb. 1, but South Korean officials have said they hoped the hockey players would come down before that and have more time to work out with the South Korean team.