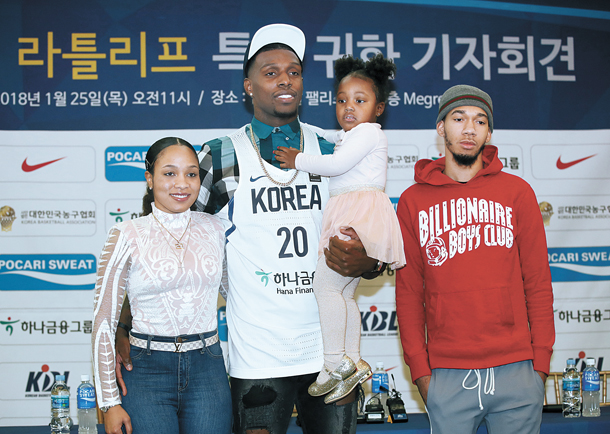 Ricardo Ratliffe, second from left, with his wife and two kids at a news conference in southern Seoul on Thursday announcing his Korean citizenship. [YONHAP]

Ricardo Ratliffe, an American forward who plays in the Korean Basketball League (KBL), will now be able to play for the national team and represent Korea on the international stage.

The Virginia native became a Korean citizen on Monday and held a news conference Thursday to announce his naturalization.

“South Korea is love to me,” the 28-year-old basketball player said at the Imperial Palace in Gangnam District, southern Seoul. “I just appreciate everyone’s love here, and I thought I should give that back.”

Ratliffe, who plays the forward and center positions for the Seoul Samsung Thunders, has adopted the Korean name Ra Gun-ah, meaning “strong kid.” “I like it a lot,” he said of his Korean name. “It fits very well with my style of play.”

The University of Missouri alum made his pro debut in Korea in 2012 when he went undrafted by the NBA in the United States after graduation.

He joined Ulsan Mobis Phoebus that year and played for the team for three seasons before signing with the Thunders in 2015.

Although Ratliffe is officially a Korean citizen, his naturalization does not open up a new spot for a foreign player on the Thunders’ roster. Each team on the league is permitted two foreign players, but the KBL agreed to keep Ratliffe as a foreign player for the remaining season, an official from the KBL told the Korea JoongAng Daily.

Whether he will be allowed to play as a Korean in future seasons is still up for negotiation.

Ratliffe is on the national team’s 12-man roster for the Asian qualifying tournament of the 2019 International Basketball Federation (FIBA) World Cup and will make his debut with the team next month, according to the Korea Basketball Association (KBA).

Although it will be his first time officially representing Korea, Ratliffe does have international experience. He led the Phoebus to victory at the FIBA William Jones Cup in Taiwan in 2014. Korea currently ranks 35th among 149 countries in the FIBA world ranking. The KBA believes the ranking could rise with Ratliffe.

Ratliffe first expressed desire to obtain Korean citizenship last January after an away game with the Jeonju KCC Egis. Part of his decision was his 3-year-old daughter Rhea.

“My daughter, who was born in Suwon in 2015, thinks of herself as a Korean,” Ratliffe said. “When she sees an American, she feels shy, but she embraces Koreans.” Ratliffe expects her to attend a Korean school.

Some suspect his reason for adopting Korean nationality was financial. According to the KBL, Ratliffe earned 273 million won ($231,800) last season. After naturalization, he could get 800 million to 1 billion won a year.

But Ratliffe said his desire stemmed from his love for Korea. “If I wanted money, I could have accepted an offer of naturalization to Taiwan three years ago,” he said. “Even after that, though there were calls for naturalization from other countries, I declined them because I love Korea.”