Radunske is ready to bounce back

Radunske is ready to bounce back 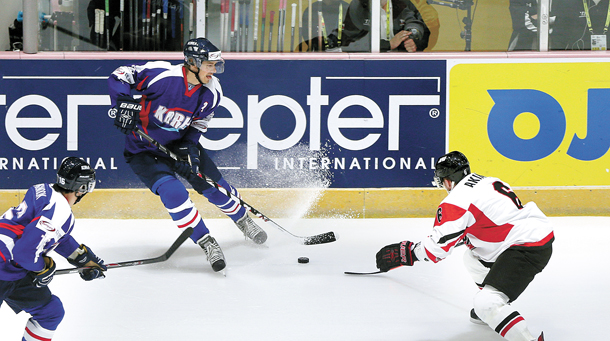 Brock Radunske, second from left, competes for a puck during the 2014 IIHF World Championship Division I Group A match against Japan. [YONHAP]

Having overcome a serious injury that kept him out for a good chunk of last year, Korean men’s hockey player Brock Radunske said Wednesday he has extra appreciation for a chance to play in the PyeongChang Olympics. 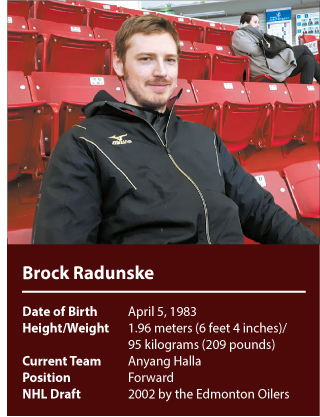 The 34-year-old native of Canada is one of seven players on the men’s national team to have been naturalized as Koreans. And the forward is the first such player to acquire a Korean passport, having done so in 2013. He’s been playing professionally for Korean club Anyang Halla in the Asia League Ice Hockey (ALIH) since 2008.

And over the years, the chance to represent his adopted nation at the Olympics was a huge motivating factor, Radunske said.

“Five years ago, when I started representing Korea, it was just at the world championships,” he told Yonhap News Agency after the national team launch ceremony in Seoul. “The Olympics were down the road and it helped keep me motivated to play at a high level. I knew it wasn’t a guarantee that I’d be on the team.”

Such uncertainty was due to a right hip injury Radunske suffered early last year. He said he had to make “a hard decision” about taking a few months off for a surgery, with an estimated recovery time of seven to eight months. But Radunske said he’s been “feeling really good” since around October and November.

“I’ve been playing hockey for a long time. The longer you play, the luckier you feel to be able to play the sport for a living,” he said. “I’ve had some obstacles in the past and overcoming those and getting a chance to play will be great.”

Radunske has been one of the most prolific scorers in the ALIH and has captured both the regular season MVP and playoff MVP honors. Though injuries slowed him down in recent years, Radunske will still be expected to produce on the offensive end for Korea at the Olympics.

The player himself said he only hopes he “can fit in well.”

“I have some good chemistry with my line mates. I’ve played with these players for a long time now,” he said. “I hope I can just contribute with a little bit of experience and give the guys confidence that they can play against these good countries.”

Among those good countries that Korea will face in group stage is Canada, the world No. 1 and two-time reigning Olympic champion. Though National Hockey League (NHL) players won’t participate in the Olympics here, Canada, featuring former NHL regulars, will still be a formidable foe for the 21st-ranked Korea.

And the game will be so important that Radunske will try to keep his emotions in check when the anthem of his native country is played.

“I’ll try not to be too emotional going into the game because I’ll be trying to focus on what I actually have to do out there on the ice,” he said. “Obviously, in that moment before the game [when the anthems for two teams are played], it’s going to take your breath away a little bit, knowing what’s happening.”