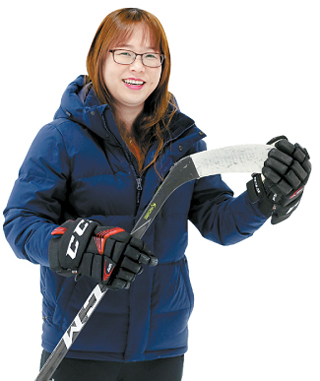 After defecting to South Korea in 1997, Hwangbo became the target of an ambush during a match between North and South Korea at the Aomori Asian Winter Games in 2003. Bearing the South Korean flag on her uniform, Hwangbo faced some of the teammates she used to train with in the North. Her experience is featured in the 2016 Korean movie “Take Off 2.”

But unlike the Aomori Asian Games, the two Koreas will be competing as one at PyeongChang. Hwangbo, now a sledge hockey coach in Goyang, Gyeonggi, expressed her thoughts about the joint hockey team and her personal experiences in a recent interview with the JoongAng Ilbo, an affiliate of the Korea JoongAng Daily.

Q. How do you feel about the joint team?

What did you think of the tune-up match between the inter-Korean team and Sweden on Feb. 4?

North Korean players have adapted better than expected. They weren’t so bad that they were an inconvenience. Head coach Sarah Murray has highly evaluated some players from the North, but they run around like mad cows. One can’t even skate very well. Murray might use four North Korean players and bench the other eight during the Games. Since we negotiated to use three North Korean players with 22 players on the roster, several members on our side weren’t even able to wear their “armor.”

South Korea ranks 22nd in the world rankings, while North Korea ranks 25th. How do you think they will fare against Sweden [5th], Switzerland [6th] and Japan [9th]?

Objectively speaking, I think they [the inter-Korean team] might lose by at least three goals, or at most, 10 goals. Our number one aim is to beat Japan, but Japan recently beat the Czech Republic and Germany. Japan is such a tough team that you can’t even see their players’ feet move. They might even view the inter-Korean team as an easy opponent. North Korean players need to follow Murray’s orders closely and help the South Korean players. They must not hesitate to get physical.

Do you think the inter-Korean team will help promote peace between the two Koreas?

Personally, I don’t think it will help much. Starting next month [after PyeongChang], I think the atmosphere will go right back.

When did you start learning ice hockey in North Korea?

I started when I was 12. I received monthly pay, uniforms and soap. There are rumors that only the children of parents in high-level government positions play ice hockey, but that isn’t true. Because we are supplied with the necessary equipment, underprivileged kids can also participate.

What was it like playing against the North in 2003?

Before the Games, I saw the names of eight of my close friends on the North Korean roster. My best friend out of the eight had her birthday on Feb. 3. During my time in the South, I saved up some money. I bought my friend a 40,000 won [$36.80] pink laced undergarment as a present. I also bought her a wristwatch and a 50,000 won gold ring. To fit in some time to chat with them, I purposely lined up last when we were shaking hands with them before the game. But to my dismay, they only shook my hand and then immediately walked right past me.

The movie “Take Off 2” was partly based on your experience. What are your thoughts on it?

The reality was far more brutal. The day before the match, one of the North Korean players saw me and said, ‘I’m not sure if you should be happy.’ I thought, ‘I’m going to die in tomorrow’s game.’ My coach was worried that they might take revenge on me, so he tried to sit me out. But he changed his mind and said, ‘Because of Hwangbo Young, the North-South match is a hot issue. We can’t possibly let her sit out for this game. They wouldn’t literally kill her, would they? Just send her out.’

Was it really that brutal?

When I made eye contact with a player I used to train with in the North, she aimed a hard slap shot my way. I returned to the bench and wailed for five minutes. When I stepped back on the ice, one by one, the North Korean players body-checked me. Each time I went back out, they body-checked me. We lost 0-10, but my coach gave me a hug afterwards and thanked me for “coming back alive.” I eventually wore the undergarment that I was never able to give to my friend.