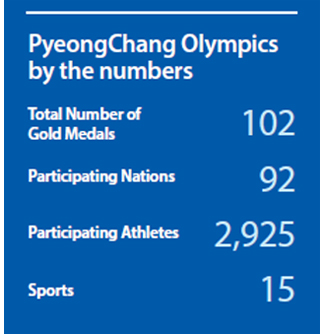 After two failed bids to host the Winter Olympics in Pyeongchang, the Games are finally starting in this usually sleepy town today, 70 years after Korea first competed in the international winter event.

Prior to the opening ceremony, Korea’s mixed doubles curling team, made up of Jang Hye-ji and Lee Ki-jeong, started off by defeating Finland 9-4 in its first round robin session on Thursday.

The 2018 PyeongChang Winter Olympics, set to run from today until Feb. 25, will be the largest Winter Olympics in history, with 2,925 athletes from 92 nations set to participate in 15 sports.

While Jang and Lee are the first Koreans to compete so far, Kwak Yoon-gy will be in contention to win Korea’s first medal in the men’s 1,500-meter short-track race tomorrow. Adding to the excitement over ice events, Lee Seung-hoon will go head-to-head against the Dutch skater, Sven Kramer, in the men’s 5,000-meter speed skating race on Sunday. Over the weekend, the unified women’s ice hockey team will make its Olympic debut, playing its preliminary round game against Switzerland tomorrow.

This calendar outlines selected events featuring Korean and other notable athletes during this year’s Winter Games.