Choi’s dreams of a short-track sweep come crashing down

Choi’s dreams of a short-track sweep come crashing down

Choi Min-jeong’s dream of finally winning Korea’s first gold in the short-track women’s 500-meter race was dramatically dashed after she was disqualified from the final at Gangneung Ice Arena in Gangwon on Tuesday. 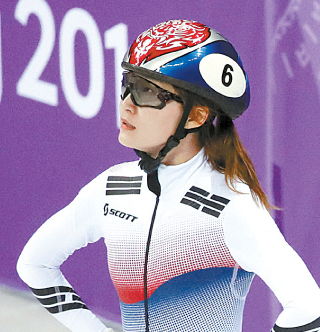 Choi Min-jeong looks at the result after the 500-meter race at the Gangneung Ice Arena in Gangwon on Tuesday. [YONAHP]

After a closely fought race, Choi finished 22 centimeters (8.6 inches) behind Arianna Fontana of Italy to claim second place. She skated over to Fontana to congratulate her on the victory while waiting for the official announcement. After a long deliberation by the judges, Choi was penalized for impeding, allowing Yara Van Kerkhof of the Netherlands to take silver and Kim Boutin of Canada to get bronze.

“I said I’ll accept any results,” Choi said. “I have nothing to say about the result, but it just makes me cry because [the result] reminds me of my hard work.”

After setting an Olympic record during the semifinals, Choi started the race at the inner side of the track. She started slowly, settling into third place at the start of the race before quickly passing Boutin and trying to catch Fontana for the rest of the race.

Choi seemed to be satisfied with the silver, although there had been hopes before the race that she may become the first-ever competitor to win gold in all four short-track events. Her celebrations didn’t last long, as she was declared to have pushed Boutin in the final lap. Though disappointed, Choi and her coaching staff accepted the judges’ decision.

The fans were less accepting.

After the race, Korean fans turned to social media to attack Boutin, claiming that she should have been disqualified for impeding as well. The attacks were reportedly so bad that Boutin was forced to change her social media settings to private.

This isn’t the first time that Korean fans have turned nasty. In 2014, Elise Christie of Great Britain was thought to have pushed Park Seung-hi at the start of the 500-meter race. Park fell and finished the race in third place, and Korean fans headed to social media to attack Christie.

The 500-meter race is the only short-track event where the woman’s team is weaker than the men’s team. The women’s team has only won two bronze medals - Chun Lee-kyung in 1998 and Park in 2014 Winter Olympics - while on the men’s side, Chae Ji-hoon won gold in the 500 meters, at the 1994 Games in Lillehammer.

Following Choi’s disqualification, the Korean short-track team has failed to achieve their goal of winning gold in all races, although the women’s team will try to sweep the remaining races, which will resume on Saturday with the 1,500 meters.

“I wanted to respond to the fans’ cheer, but I couldn’t,” Choi said. “I’ll try my hardest in the remaining races.”

Prior to the women’s 500-meter final, the men’s 5,000-meter relay heat was held, with Korea setting an Olympic record to advance to the final. The men’s team finished the race at 6 minutes and 34.51 seconds. The men’s relay final will be held on Feb. 22 at 9 p.m.

In addition to the relay heat, three Koreans - Lim Hyo-jun, Hwang Dae-heon and Seo Yi-ra - competed in the men’s 1,000-meter heat and qualified for the quarterfinals.

The quarterfinals and the final races will resume on Saturday, along with the women’s 1,500-meter race.