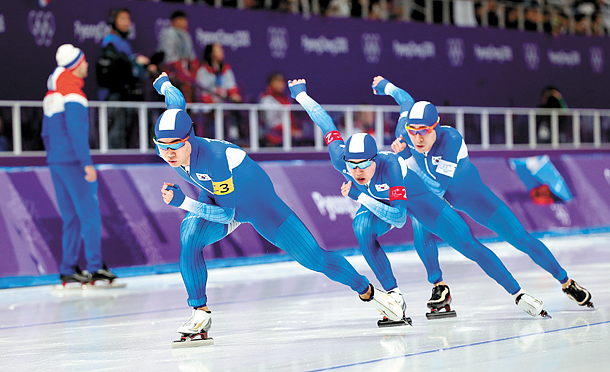 From left, Kim Min-seok, Chung Jae-won and Lee Seung-hoon race against Norway in the speed skating men’s team pursuit final at the Gangneung Oval in Gangwon on Wednesday. [YONHAP]

Korea won silver in the men’s team pursuit, clocking 3 minutes and 38.52 seconds at the Gangneung Oval in Gangwon on Wednesday.

Starting the first lap 0.75 of a second behind Norway, Korea made an attempt to catch up in the middle of the race and briefly held the lead after the third lap. In the final three laps Norway took back the lead, finishing the race in 3 minutes and 37.32 seconds.

By finishing the race 1.20 seconds behind Norway, Korea won its second consecutive silver in the race.

Prior to the final, Korea raced New Zealand in the semifinals, where a last-minute sprint in the final lap allowed them to finish 0.71 of a second ahead.

With another medal finish, Lee Seung-hoon has won his fourth Olympic medal. Kim Min-seok won his second medal in PyeongChang while Chung Jae-won became the youngest member on the Korean national team to win a medal at the Olympics.