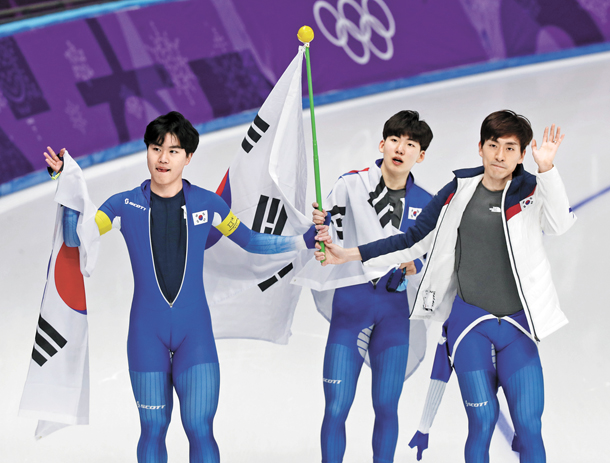 Korea won silver in the speed skating men’s team pursuit, clocking 3 minutes and 38.52 seconds at the Gangneung Oval in Gangwon on Wednesday. 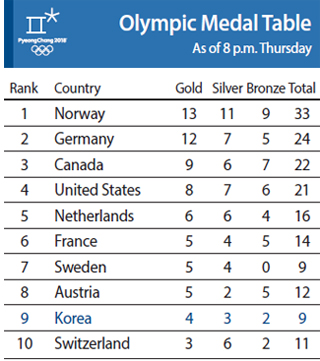 Starting the first lap 0.75 of a second behind Norway, Korea made an attempt to catch up in the middle of the race and briefly held the lead after the third lap. In the final three laps Norway took back the lead, finishing the race in 3 minutes and 37.32 seconds.

By finishing the race 1.20 seconds behind Norway, Korea won its second consecutive silver in the race. The Netherlands won bronze, clocking 3 minutes and 38.40 seconds.

Prior to the final, Korea raced New Zealand in the semifinals, where a last-minute sprint in the final lap allowed it to finish 0.71 of a second ahead.

“It’s a little disappointing because our goal was to win gold,” Lee Seung-hoon said after the race. “But we won silver because they [Chung Jae-won and Kim Min-seok] did a great job. I’m very thankful.”

Though Korea expected to face the Netherlands, which held both the world and Olympic records, in the final, instead it was Norway that won the semifinal, finishing a good 1.38 seconds ahead of the Dutch. Norway’s time of 3 minutes and 37.08 seconds in the semifinals was good enough to set a new Olympic record.

With another medal finish, Lee has won his fourth Olympic medal. This is the most number of medals won among Asian athletes at the Winter Olympics. The mass start today will be Lee’s last chance to win a medal.

“I still have another race so I’ll try harder,” Lee said on Wednesday. “We fell behind toward the end of the race. Silver is still a very special medal to us. Since we have two days until the mass start race, there shouldn’t be any problem recovering.”

But when the mass start race was officially added to the Olympics, Lee changed his mind. Since he started his skating career as a short-track speed skater, mass start, which is raced in a format similar to short track, has always been a category Lee was confident in.

Though Lee claims his success is down to luck, his brand of luck comes from tough daily training. Lee starts his day at 5 a.m. and practices for 10 to 11 hours a day, only breaking to eat and sleep. When Lee injured his right leg at the International Skating Union (ISU) World Singles Speed Skating Championships in February, he did not take a break from training.

“I get tired of training but I do it every day,” Lee said back in March. “Even when I don’t think I can, I go to the rink and rest there.”

While Lee may have led the other two skaters to race as a team, he often found that he also had to train hard to make sure he didn’t fall behind. Racing along Kim and Chung, who are more than ten years younger, Lee’s leadership led to another success for the national team.

Not only was there a huge gap in age difference, there was also a huge difference in their levels when they first started training together - Lee was already a veteran and Kim and Chung were rookies.

Kim won his second medal in PyeongChang while Chung became the youngest member of the Korean national team to win a medal at the Olympics. Upon completion of the team pursuit race, Kim is now done with his Olympics.

“It was a great experience competing in the Olympics hosted in our country,” Kim said. “I’ll work harder until the Beijing Olympics.”

Although Wednesday’s race was Chung’s first time on the Olympic stage, he said the fans’ cheers helped him significantly as it allowed him to overcome his nerves before the race.

Along with Lee, Chung will compete in the mass start race tomorrow.