Korean speed skaters Kim Bo-reum and Park Ji-woo are under fire as over 550,000 Koreans are calling for the expulsion of the skaters from the Korea Skating Union (KSU) as of Thursday on the online Blue House petition page. 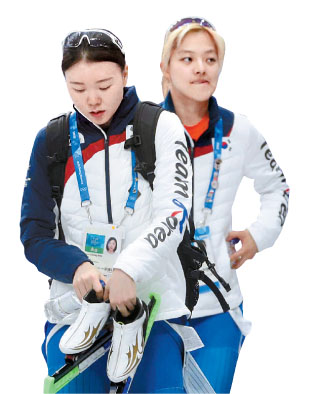 “Though it was a team race,” the petition reads, “Kim Bo-reum and Park Ji-woo … skated forward by themselves, abandoning their teammate Noh Seon-yeong.

“It is a clear national disgrace that such people are representing the country in the Olympics. We are petitioning that Kim Bo-reum and Park Ji-woo forfeit their rights as national athletes and be banned from international competitions including the Olympics.”

The petition was raised after a controversial interview by Kim and Park after the women’s speed skating team pursuit race in the Gangneung Oval in Gangwon on Monday, gathering over 200,000 online signatures in just one day. With 27 days left until the petition closes, it seems likely that the number will skyrocket.

After an emphatic loss on Monday, Korea failed to advance to the semifinals. In a post-race interview Kim implied that it was Noh’s fault that the team wasn’t successful.

“We raced as fast as we could in the final lap,” said Kim, “but since the final record is determined by the time the last racer of a team crosses the finish line…”

In team pursuit, the final skater plays a crucial role as the clock only stops when the last one reaches the finish line. As such, teams usually stick together throughout the race.

Noh was the third and last skater, but was almost four whole seconds behind Park and Kim, who shot ahead. The team came in seventh in the quarterfinals, clocking 3 minutes and 03.76 seconds.

“It’s unthinkable that there’s such a distance between the athletes in a team sport like this,” said SBS commentator Bae Sung-jae.

“Once I saw the board after the race, I was embarrassed to not see her,” Park said. “During the race, our coaches told us that [Noh] was way behind, but I didn’t realize it because I was so nervous to race in my very first Olympics.”

Under mounting criticism, Kim and the team’s coach Baek Chul-gi held a press conference at the Gangneung Oval on Tuesday apologizing for the comments and lack of teamwork.

According to Baek and Kim, prior to the game, the team agreed to a strategy in which Noh would be the third skater.

But in a separate interview, Noh replied that they did not come up with such a strategy, and that she had prepared to be in the middle, rather than the third skater.

“They [Kim and Park] have disgraced [South Korea] on an international level by showing that they were racing with an ulterior motive,” wrote one petitioner. “No matter where in the world people watched the broadcast, no one is going to be complimenting Korea’s teamwork.”

The team seemed just as fractured on Wednesday when they placed last against Poland in a race to determine the seventh and eighth-placed team. They came in even slower than on Monday, clocking 3 minutes 07.30 seconds - although they did cross the finish line together. The trio left promptly after the race and did not speak to each other, nor to reporters.

“Noh [was] in tears after the race [on Monday] while Kim and Park appeared to ignore her and walk away with only their Dutch coach, Bob de Jong, offering Noh comfort,” reported Reuters on Wednesday.

Canadian news agency The Globe and Mail noted the moment was a “televised cruelty” and a “wholesale betrayal of a teammate,” on Tuesday.

Noh also said that because Kim practiced at a different rink, it was hard to train for the team event.

Prior to the Olympics, Kim trained at the Korea National Sport University because she was selected as a likely medal contender for the mass start and received special training with two other athletes for the event.

Some believe it was the special treatment that Kim got that deteriorated their relationship and in turn affected their teamwork at the race on Monday night.

“I felt like [the KSU] already decided on who would win the medals,” said Noh, who believed that the KSU was discriminating against her.

The relationship between Noh and the KSU was already exacerbated, after the KSU disqualified Noh right before the start of the Olympics, when they misunderstood the International Skating Union’s (ISU) rules of eligibility. According to the ISU, skaters competing in the team pursuit race must qualify in at least one individual race, which Noh was not qualified for.

“I am no longer proud of being on the national team,” Noh posted on social media on Jan. 24. “I don’t want to play for the country.”

But after two Russian speed skaters were excluded from the Olympic entry, Noh was given another chance to compete and KSU President Kim Sang-hang released a letter of apology for her treatment.

Noh skated in PyeongChang in hopes of winning gold to honor her late brother, former short-track world champion Noh Jin-kyu, who died of bone cancer in 2016.

In the meantime, Kim’s main sponsor Nepa announced that it would not be renewing her contract once it ends on Feb. 28.