Alpine skiers are the perfect pair

Alpine skiers are the perfect pair 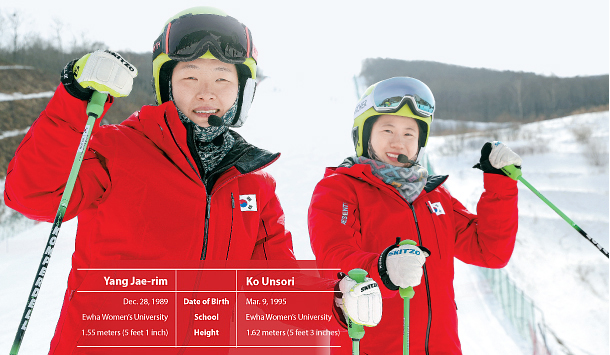 With cries of “Turn” and “Up,” Ko Unsori and Yang Jae-rim raced down the slope at Jeongseon Alpine Centre in Gangwon on Feb. 22. Flying down the mountain at speeds as high as 60 miles per hour, alpine skier Yang had to trust that Ko would safely guide them through the course. 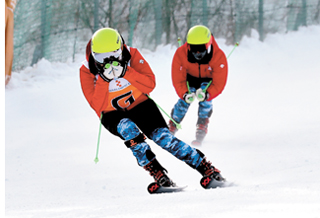 Ko Unsori, left, and Yang Jae-rim race down the slope at Jeongseon Alpine Centre in Gangwon. Visually imparied skiers are guided by a runner who wears a vest with a “G” on it. [WOO SANG-JO]

In alpine skiing events for visually impaired athletes, skiers compete as a pair with a guide navigating the course for the athlete. If the distance between the guide and the competitor gets further than two posts, the pair is disqualified. As a result, the guide has to regularly look back and check their distance from the athlete throughout the race. The athlete has to cross the finish line in order to end the race and record a time.

Competing together since June 2015, Yang and Ko are an ideal match.

Yang lost her vision when she was still a baby due to hyperoxia, being exposed to an excessive supply of oxygen. After ten different surgeries she regained minimal vision in her right eye but was not able to recover any sight in her left eye. She started to ski with her mother when she was five years old to help improve her sense of balance.

Despite an early start on the slopes, it wasn’t until her college years that Yang really started to learn the sport properly. After visiting the Korea Para Ski Association in 2009 to sign up for a structured ski program, she was offered the chance to ski competitively. On Feb. 21, 2014, Yang made her debut at the Paralympic Winter Games in Sochi. She finished fourth in the giant slalom.

Yang and Ko had been competing as a pair since August 2015 and the two are favorites to bring home a medal at this year’s Paralympic Games. In June 2015, Ko applied to be Yang’s guide runner. Having skied since elementary school, Ko also comes from a competitive background and once represented Korea at the Winter Universiade.

“I saw Jae-rim’s race at the Sochi Paralympics,” Ko said. “I had never met her in person but I wanted to compete with her.”

But the two don’t agree on everything. While Yang enjoys listening to slow music, Ko prefers hip-hop and dance tracks. But once they get on the slopes, these different personalities become their greatest strength.

“I get very nervous before the competition but since Sori is very active, it helps me a lot,” Yang said.

On the other hand, Yang’s nerves also help Ko, as she has learned to calm herself down from Yang.

Yang and Ko proved to be a perfect team, winning various slalom and giant slalom races when they first competed together in August 2015.

A knee injury in January 2016 took Yang out of the game for 10 months, but Ko stuck by her side throughout the recovery period.

“Sori visited me regularly,” Yang said. “We talked about skiing a lot and I think this allowed us to keep ourselves consistent even after the injury.”

For Yang, the most disappointing moment in her career was missing a podium finish by finishing fourth in Sochi. But this time, she and Ko are determined to medal. As Yang says, “I’m at a point where I can memorize the course in my head. Everything’s ready.”

“We’ve worked hard over the past three years,” said Ko. “I’ll help Jae-rim as much as I can so she can rely on me during the race.”