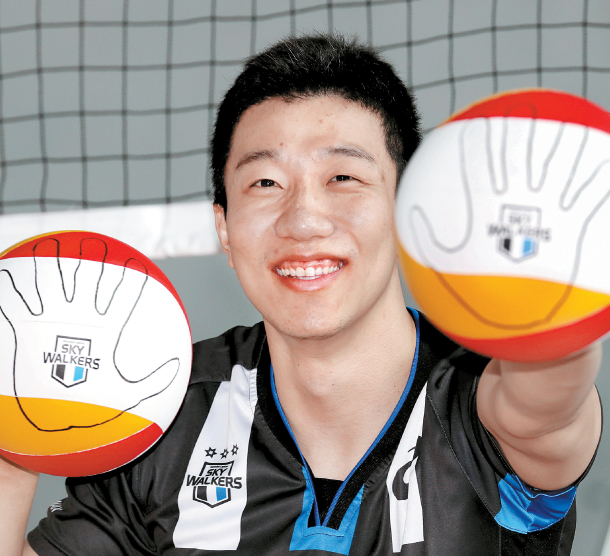 Shin Young-suk of the Cheonan Hyundai Capital Services Skywalkers holds volleyballs featuring his handprints. The middle leads the league in blocks and successful attacks going into the postseason. [KIM SUNG-TAE]

This season, Shin Young-suk of the Cheonan Hyundai Capital Services Skywalkers has been one of the most successful players in the Korean Volleyball Federation (KOVO), leading the league in blocks at 0.85 per set, and successful attack percentage, at 62.75 percent. With the help of Shin, the Skywalkers easily secured the 2017-18 regular season title in advance, on Feb. 27.

Once the Skywalkers won the regular season, head coach Choi Tae-woong said without hesitation, “Shin Young-suk led the team to a victory.”

KOVO fans also agreed, as seen by Shin receiving the most All-Star votes in January.

“Last year, I couldn’t play well even if I tried to,” Shin said. “This season, I only thought about helping the team and now, I score by just hitting the ball. It’s very mysterious.”

Despite having a successful season, Shin hasn’t thought about winning the MVP award, saying, “The MVP award only exists in my imagination. It still doesn’t make sense but if I win, I think I’m going to cry.”

Since Shin made his debut in the league, he has been considered Korea’s best middle. During the 2008 rookie draft, Shin was drafted second by the Seoul Woori Card Wibee. In 2010, Shin was named Rookie of the Year for the 2009-10 season. For three consecutive seasons, from 2012 to 2014, Shin led the league in blocks.

However, Shin didn’t receive much attention as a middle, as the spotlight tends to shine on the league’s big-name outside hitters. He found himself focusing more on his personal records than the club’s success.

“Before, I only cared about myself,” Shin said. “As a professional player, I always thought that personal records were more important than the team’s victory. So I only focused on increasing my personal value.”

But Shin’s mindset completely changed with his new team, Skywalkers, which he joined after he was discharged from the military in January 2016.

Shin was continuously scolded by Choi, who yelled at him, saying, “Why do you play by yourself?” At first Shin didn’t understand the criticism, but once he started seeing the other players enjoying themselves, Shin’s thinking slowly changed.

“One day, I looked back at the court and it seemed like everyone was enjoying the sport but me,” Shin said.

To blend in with the team, Shin told his teammates everything he knew. In the league, Shin is known as “little Choi Tae-woong” for the time he spends studying volleyball. Just like Choi, Shin enjoys watching clips of volleyball players from other countries and discussing about their strengths and style.

In addition to his knowledge of the sport, Shin’s 10 years of experience in the professional league and with the national team has given him a great advantage when it comes to analyzing other teams.

“At first, I could see the younger players not paying attention to what I said,” Shin said. “I was like that when I was in my 20s. So I try to make it as fun as possible. I try my best to get them involved by asking their opinions or questions.”

As a result, this season the Skywalkers ranked first in blocks, with 2.65 per set.

“Normally, professional players don’t like to talk about their strategies, but Shin Young-suk tells the younger players as many details as possible,” said Shin Hyun-seok, general manager of the Skywalkers.

“I was disappointed when I was a younger player because whenever I asked the senior players about their knowledge, they didn’t tell me,” the all-star middle said. “It took me some time to get to this point. I don’t want the younger players to repeat what I went through. By teaching them, I get to look over my own strategies and it allows me to develop as a player.”

Shin’s success this season comes from his knee exercises. As volleyball players are required to jump a lot, they often face chronic knee pain. And middles tend to have more serious problems with their knees because they jump more each game than the other positions on the court. While serving in the military, Shin tried to take care of his knees by resting, but it didn’t help much.

After the season last year, Shin came up with a program to strengthen his knees. In May and June, his workout had one hour of knee strengthening, nothing else.

“I had my doubts, but I thought that it would be my last opportunity to recover my knees,” Shin said. “I was really surprised when my body felt really good in national team games.”

Once Shin saw improvements, he decided to spend an hour every day exercising his knees before bed.

Having won the regular season already, Shin still has one last goal that needs to be achieved - winning the playoffs. As the Skywalkers won the regular season title, they automatically advanced to the final and will play against the winner of the postseason playoff between the Incheon Korean Air Jumbos and the Daejeon Samsung Bluefangs.

The Bluefangs won the first playoff game 3-1 against the Jumbos on Sunday. The playoff will be a three-game series, while the championships will be a five-game tournament.

“I’ve been watching last season’s championship game over and over again,” Shin said. “There are about 140,000 views and about 10 percent of them are probably me. I really want to win this season and start watching some different games.”