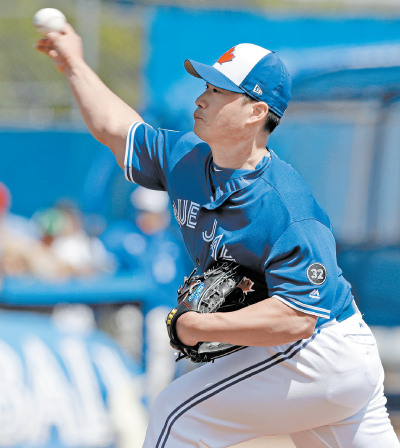 Oh made quick work of the Philadelphia Phillies in the top of the fifth inning at Dunedin Stadium in Dunedin, Florida, on Wednesday.

The right-hander took the mound with the score knotted at 2-2 and went up against the heart of the Phillies order.

No. 3 hitter Maikel Franco popped out to the catcher to begin the inning. Then Carlos Santana grounded out to third. Oh then struck out Aaron Altherr on three pitches for a breezy, seven-pitch frame.

“I felt pretty good out there,” Oh said through a translator in the Blue Jays clubhouse to the Toronto Star after the game. “My stuff was coming out pretty well so I’m happy with that.

“Today was my first outing so I don’t want to go ahead and say how it’s going to go for the entire season, but the live batting practice and bullpen sessions helped me a lot to get to this stage and get ready for the season so I just have to go back and continue what I’ve been doing so far.”

Oh signed a one-year, $1.75 million deal with the Jays on Feb. 26, but he didn’t get his U.S. visa until Tuesday. Because he hadn’t been allowed to appear in spring training games until Wednesday, Oh had been limited to bullpen and live pitching sessions.

He’s expected to join the likes of Ryan Tepera, Danny Barnes and Aaron Loup in the Jays’ bullpen and set up for All-Star closer Roberto Osuna, who has had 95 saves over the past three years.

The Blue Jays have seven spring training games remaining, including some split squad games through next Tuesday. They will stay in Florida through Sunday, and their final two spring games, against the St. Louis Cardinals, Oh’s former club, will be held at Olympic Stadium in Montreal on Monday and Tuesday.

The Jays will open the regular season at home against the New York Yankees on March 29.

Oh had a deal fall through with the Texas Rangers earlier in February over what U.S. reports said were “concerning issues” with his right elbow. But the 35-year-old has said he has “no problem at all” with his pitching arm.

The Jays swooped in and acquired the former St. Louis Cardinals closer, hoping he could bridge the gap to All-Star closer Roberto Osuna.

Oh is the career saves leader in the Korea Baseball Organization (KBO) with 277 over nine seasons with the Samsung Lions. He recorded 80 more saves for the Hanshin Tigers in Japan in 2014 and 2015 before jumping over to the Cardinals from 2016 to 2017.