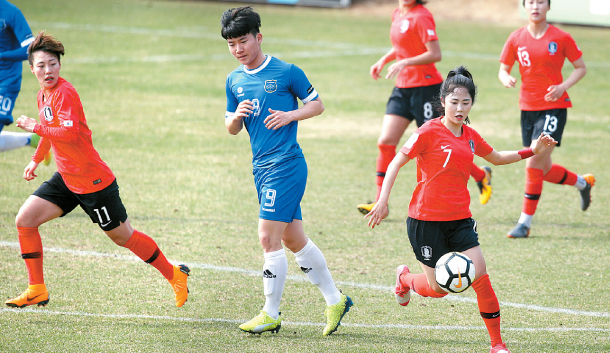 The Korean women’s national football team, in red, trains at the National Football Center in Paju, north of Seoul, on March 27, prior to leaving for the AFC Women’s Asian Cup in Jordan. [YONHAP]

The Korean women’s national football team has opened its first match against Australia at the continental tournament with a draw.

Korea, 16th in the latest FIFA rankings, played to a scoreless draw with Australia, ranked sixth, at King Abdullah II Stadium in Amman, Jordan, on Saturday in their Group B opening match at the Asian Football Confederation (AFC) Women’s Asian Cup.

The 2019 AFC Women’s Asian Cup is also considered the final Asian qualification for the 2019 World Cup in France, with the top five nations qualifying for the marquee event in women’s football.

The top two teams from the two groups will reach the semifinals and the third-place teams from each group will square off in the fifth-place match for the last ticket to the Women’s World Cup.

Korea is in Group B with defending champions Japan, Australia and Vietnam. Japan beat Vietnam 4-0 to move up to first place in the group.

Korea will next face Japan at Amman International Stadium in Amman on Tuesday and will wrap up the group stage Friday with Vietnam.

The Taeguk Ladies, led by head coach Yoon Duk-yeo, started with a 4-1-4-1 formation, deploying Jung Seol-bin as the lone striker.

Korea didn’t create many scoring chances against Australia, the top-ranked AFC team, but succeeded in containing the opponent’s lethal attackers like Sam Kerr and Kyah Simon.

“I want to thank our players that we earned a point against Australia,” Yoon said after the match. “I’m especially satisfied that we didn’t concede a goal.”

Yoon admitted that his side played defensively against the Australians, but the team will come up with different tactics against Japan.

“We didn’t plan to defend only, but since the opponents are strong, we did focus on defense,” he said. “Against Japan, we’ll play more aggressive football.”

“I’m happy that I was able to finish my meaningful 100th match nicely,” she said. “It would’ve been better if we won, but I should now forget about the 100th match and focus on our next match against Japan.”