Ratliffe returns to the team that made him big

Ratliffe returns to the team that made him big

Ricardo Ratliffe, an American forward who plays in the Korean Basketball League, is returning to the team that first recruited him to Korea. 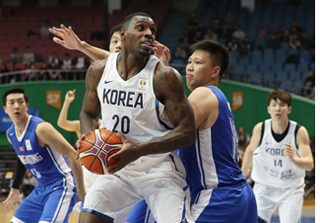 Ricardo Ratliffe, left, plays against Hong Kong during the Asian qualifying tournament of the 2019 FIBA World Cup at Jamsil Gymnasium in southern Seoul on Feb. 23. [YONHAP]

The University of Missouri alum made his professional debut with the Ulsan Hyundai Mobis Phoebus in 2012 after he went undrafted by the NBA. In his three years with the Phoebus, they topped every season and won every championship, establishing Ratliffe as a valuable league asset.

In 2015, he left the team to play for the Seoul Samsung Thunders.

Ratliffe concluded his most recent season with the Thunders scoring an average of 24.48 points per game with 13.58 rebounds. He had a double-double in 59 consecutive games, making him the league’s best center. Ratliffe ranked first in rebounds and second in average score among foreign players last season.

“In 2012, we drafted a rookie, Ratliffe who just graduated from college at the time, and he led us to championship victories for three consecutive seasons,” said Lee Do-hyun, general manager of the Phoebus. “I’m glad to have a player with great experience back on our team. We want to bring back the championship trophy.”

His successful career in the Korean league earned Ratliffe special naturalization in January. Some suspect his reason for adopting Korean citizenship was financial, but Ratliffe said his decision stemmed from his love for the country.

The next month, Ratliffe, under his Korean name Ra Gun-ah, made his Team Korea debut at the Asian qualifying tournament of the 2019 FIBA World Cup. Although it was Ratliffe’s first time representing Korea, he did have prior international experience with the Phoebus. In 2014, he led the team to victory at the FIBA William Jones Cup in Taiwan.

For the upcoming Asian Games in August, Ratliffe is likely to join the national team again, and the Korea Basketball Association expects the country’s world ranking to rise. Currently, Korea is 31st among 147 countries.

And because Ratliffe is considered neither a foreign nor Korean player, the KBL has created special rules that only apply to him.

In terms of playing time, the KBL has also set up guidelines for Ratliffe. Normally, teams can only have both foreign players on court during the second and third quarters. For this rule, Ratliffe will count as one of the two foreign players.

Despite the limitations, the Phoebus are looking forward to Ratliffe’s return.

“There are no other players that can replace Ratliffe,” said Phoebus manager Yoo Jae-hak. “I’m glad he’s back on our team.”