Yoon Seong-bin of the Lotte Giants may be one of the rookies getting attention this season, but he is not yet satisfied with any of his performances. 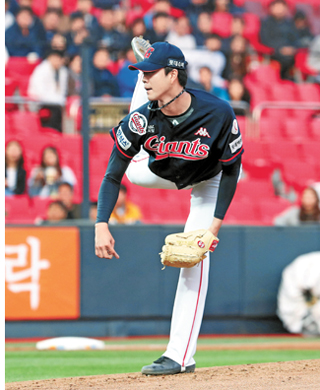 Yoon Seong-bin of the Lotte Giants throws a pitch during a game against the KT Wiz on April 26. [YONHAP]

“The KBO is a stage to fulfill my role, not to improve my skills,” Yoon said.

In the six games Yoon has started thus far, he has picked up a win and two losses, and has an ERA of 5.16. Though Yoon’s statistics aren’t the best, he has been a big contributor to the team while filling the absence of pitcher Park Se-woong. During his first five games, Yoon did not give up more than three runs and pitched five innings on average. Even when the Giants were losing, he minimized his mistakes to give the team space to catch up in the remaining innings.

During his debut game against the SK Wyverns on March 25, Yoon remained focused after giving up a home run to the first batter, Jeong Jin-gi, in the first inning.

“It’ll be mentioned until the end of my baseball career,” Yoon said. “I was lucky to not give away a run when the bases were loaded with no outs. Striking out [Jamie] Romak was big. After [Romak], Jung Eui-yoon hit a foul home run. If that went over the fence, I don’t think I would still be here.”

Yoon finally made his home debut at Sajik Stadium on March 31 against the NC Dinos. Though Yoon was so nervous that he can’t remember a thing from the game, he said it was exciting because he has dreamed of playing for the Giants at Sajik ever since he first picked up a baseball.

Yoon was the Giants’ first pick at the 2017 KBO rookie draft. Yoon was considered a top prospect and received attention from MLB clubs as well as the KBO. Despite expectations, Yoon wasn’t able to play during the 2017 season due to a shoulder injury. The year of absence minimized Yoon’s chances of taking the mound in the KBO, but he earned his spot on the pitching rotation during spring training thanks to Park’s absence after an injury.

After the Giants’ game against the KT Wiz on April 26, Yoon was sent down to the minors. He is now awaiting his next call-up. Giants’ manager Cho Won-woo said that it was planned and Yoon also admitted that it was about time that he took a break. Though Yoon’s right arm is resting, he is undergoing tougher training sessions to stay in shape.

Yoon hopes to eventually be able to pitch more innings so he can help the Giants’ bullpen. He is most focused on fixing the inconsistency in his pitching speed. In his six starts, he threw as fast as 150 kilometers (93 miles) per hour, but after the fourth inning his pitch speed dropped to 140 kilometers per hour.

“I don’t want to be rushed,” Yoon said. “I believe that I need more experience to have better control of my pitches. My goal is to play in the professional league for as long as I can without getting injured.”