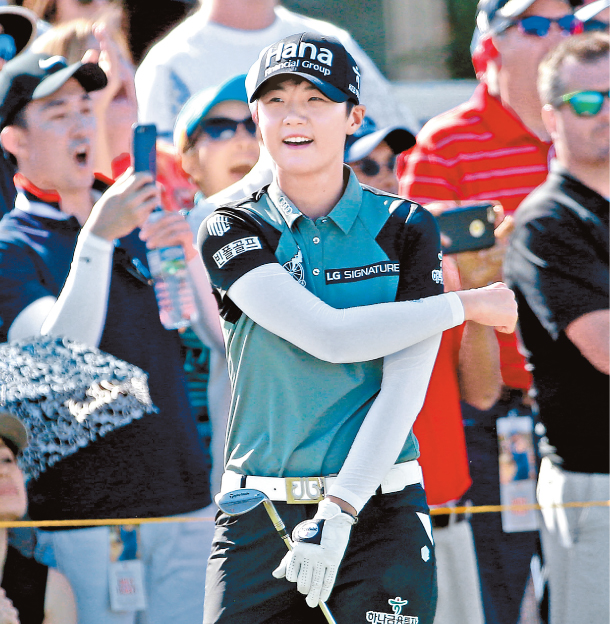 Park Sung-hyun celebrates after she makes a chip-in birdie on the 18th hole during the final round of the Volunteers of America Texas Shootout in The Colony, Texas, on Sunday. [AP/YONHAP]

Park Sung-hyun picked up her third LPGA victory by winning the Volunteer of America LPGA Texas Classic at the Old American Golf Club in The Colony, Texas on Sunday.

With an eagle, five birdies and two bogeys, Park shot five under par in the final round to finish one shot ahead of runner-up Lindy Duncan of the United States.

Park demonstrated an outstanding short game throughout the tournament. Though she got off to a slow start with a bogey on the par-4 first, she quickly tied the lead with a chip-in eagle on the par-5 fourth. An eagle from 30 yards allowed Park to get to seven under par, and a 1-meter (3.28-foot) birdie putt on the par-4 sixth helped Park take a sole lead at eight under-par. She extended her lead with back-to-back birdies on the eighth and ninth hole to get to 10 under par.

Though Park started with a bogey in the back nine, she quickly took the lead back with a birdie on the next hole. Keeping a one-shot lead into the last hole, Park finished with another birdie, securing her victory without having to go through a playoff. Since there were still about 30 players that had not finished, a birdie was a must for Park to secure the lead. After missing the green, Park successfully chipped in from 20 yards to close out her round.

“I knew it was a pretty important shot,” Park was quoted as saying on the LPGA website. “It was a pretty difficult situation and I’m glad I made it.”

Throughout the two rounds of the tournament, Park made three chip-ins.

With the victory, Park took home $195,000 in prize money, her first victory since August 2017 and her third career victory on the LPGA Tour. Park is now the fourth Korean golfer to win a tournament this season.

Park, who made her LPGA Tour debut in 2017, had a successful rookie season, winning three titles - rookie of the year, player of the year and the money title. Not only that, Park won two tournaments, which includes a major tournament, and briefly took the No. 1 spot in the Rolex World Ranking in November, becoming the first rookie to do so since the ranking system was first introduced in 2006.

Despite a successful debut last season, Park got off to a slow start, missing two cuts in seven tournaments. Park’s second year on the Tour was nothing like her first, as she only had one top ten finish, ending tied for ninth at the ANA Inspiration at Mission Hills Country Club in Rancho Mirage, California.

A break from the tournament, skipping the LPGA Mediheal Championship, proved to be the right choice. Park came back with a new approach, overcoming the difficulty she has had with her tee shot by switching to a three wood instead of a driver. Despite hitting her tee shot shorter than usual - an average of 257.25 yards - she only missed three fairways over the two rounds.

“After this win, I feel like I can finish out the season a lot easier,” Park was quoted as saying. “I’m really excited about the rest of the season.”

Following Park, Kim Sei-young was the second-best finisher amongst Korean golfers at eight under par, tied for fourth. This was Kim’s best finish of the season.

After a week off, the LPGA Tour will continue with the Kingsmill Championship presented by Geico in Williamsburg, Virginia, from May 17 to 20.