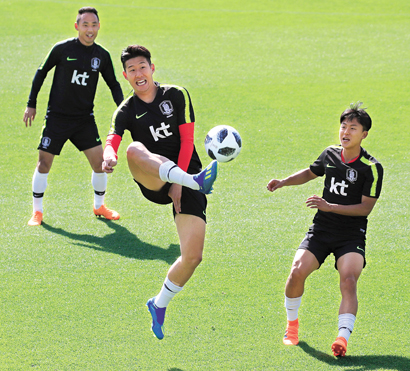 Lee Seung-woo of Hellas Verona turned out to be coach Shin Tae-yong’s surprise pick when he unveiled the national football team’s 28-man preliminary roster for the World Cup last week.

Although it once seemed like a challenge for Lee, 20, to join the crew, the young winger is now very likely to travel to Russia, which is hosting the FIFA tournament, to replace Lee Keun-ho and Kwon Chang-hoon.

When the preliminary roster was announced, both of them were included on the list. But a day before the national team call-up, they dropped out because of injuries. Lee Keun-ho tore the medial collateral ligament in his right knee and Kwon ruptured his Achilles tendon during his club’s season finale match.

The circumstances have catapulted Lee Seung-woo into the cards as the most likely player to be the national team’s winger, playing alongside Son Heung-min of Tottenham Hotspur, at the World Cup.

Lee is the youngest player on the team, but he’s having no trouble keeping up with older veterans, actively engaging in training. Off the field, he has been cheering up his teammates, who have been discouraged by the absence of so many injured players.

Just like Son, who dropped out of high school to leave for Germany to play football, Lee left for Spain at the age of 13. Since 2011, he played for FC Barcelona’s youth club.

During the U-20 FIFA World Cup, Lee was the Korean team’s main striker and helped them become the first team to advance to the round of 16.

After the U-20 tournament, Lee announced his decision to leave Barcelona and sign with Hellas Verona in Italy to compete at a more senior level. Once the announcement was made, a number of football fans doubted he would be able to perform as well as he did during his junior career, given his relatively short height of 5 feet 7 inches.

Although Lee concluded the 2017-18 season without much playing time, he did manage to leave a strong impression at the end, scoring his first goal for Verona club during their match against AC Milan on May 6.

The goal was enough to catch Shin’s attention. Lee got his first call to the national team this month.

“Lee had a hard time for a while in Italian Serie A, but he had a good pace late in the season,” Ki Sung-yueng, captain of the Korean national team, told Yonhap. “In football, you can’t ignore the possibility that the underdogs upset the favorites. We can make something happen, and we have the players who can do it.”

When Lee was first added to the team, many fans thought it was just for the next World Cup since he had little experience at the senior level.

However, Shin has said that Lee could be Korea’s secret weapon in their group match against Sweden on June 18.