Cha Du-ri isn’t going to stand on the sidelines

Cha Du-ri isn’t going to stand on the sidelines 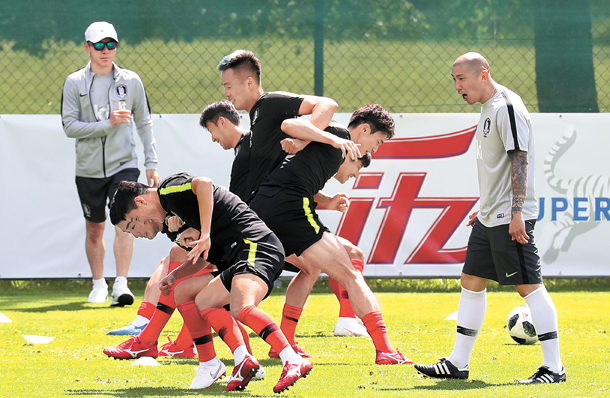 Coach Cha Du-ri is running laps around the Korean players as they train at the Steinbergstadion in Leogang, Austria, proving he’s the busiest man on the pitch as he sprints around the field encouraging players and cheering them on.

“There’s no such thing as enough,” said Cha. “Once we fall behind, we’re done.”

Before the national team’s training starts, Cha, son of football legend Cha Bum-kun, is always the first to offer to help staff set up the goal nets and training tools. Cha may be a scary coach during training, but off the field he is like a big brother to the players.

When Cha wasn’t added to the national team during the 2014 FIFA World Cup, a lot of fans criticized the team, saying that its failure - getting eliminated in the group stage - was due to the absence of veteran players like Cha.

Cha retired after a successful showing at the 2015 Asian Cup in Australia, where he led the team to a runner-up finish.

Though Cha retired as a professional player, he is still a must-have member of the Korean team. As a young coach, Cha has built a close relationship with the young players, helping them quickly adjust to the team.

Of the 23 players representing Korea, only eight have experience playing at a FIFA World Cup. Of the eight, Ki Sung-yueng of Swansea City and Son Heung-min of Tottenham Hotspur are the closest to Cha, as they have received a large amount of help from him throughout their career.

Ki and Cha used to be teammates in 2009, when the two played for Celtic. Though Cha joined the club later, Ki mentioned that he received a lot of advice from Cha regarding playing more aggressively and physical contact during matches.

Son, on the other side, never got to play at the same club as Cha but received a lot of help from him when he left for Germany in 2008. At the time, Hamburger SV’s youth club coach was a friend of a friend and since Son couldn’t speak much German, Cha volunteered to be a translator.

Though Cha’s father, Cha Bum-keun, is a living legend in Korean football, Cha wasn’t able to follow his father’s footsteps, as he spent a longer time as a bench player and was part of a club that got relegated to a lower league. As a result, Cha understands the hardship of players that are struggling on the national team.

For this reason, Cha serves as a bridge between the players and head coach Shin Tae-yong.

Not only that, Cha also serves as an advance scout, traveling around Europe. Right after Korea’s friendly match against Honduras on May 28, he left for Stockholm, Sweden to analyze the Swedish national football team, Korea’s first group match opponent at the FIFA World Cup.