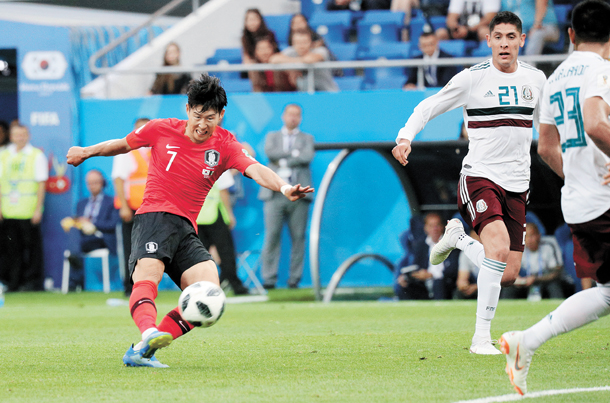 In a match attended by President Moon Jae-in, the Korean national football team suffered its second loss at the 2018 FIFA World Cup, falling 2-1 to Mexico at Rostov Arena in Rostov-on-Don in Russia on Saturday. 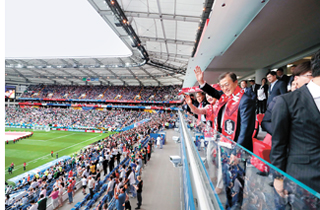 President Moon Jae-in, right, waves to fans before the start of the match.[YONHAP]

After falling to Sweden 1-0 in their opening match, the team hoped to keep their chances alive of advancing to the round of 16, but failed to do so against a surging Mexican offense.

Unlike the first match, in which head coach Shin Tae-yong made a surprise decision to put in towering striker Kim Shin-wook in the starting lineup, the team returned to its usual 4-4-2 formation with Son Heung-min and Lee Jae-sung at the top.

However, the defense-heavy formation didn’t help much as Mexico’s Carlos Vela scored on a penalty kick in the 26th minute, after defender Jang Hyun-soo was called for a handball in the box.

“I think we executed the things that we prepared,” Shin was quoted by Yonhap as saying after the match. “But giving up the opening goal on a penalty made things difficult for us. That’s the disappointing part.”


In the 64th, Shin substituted Lee Seung-woo for Joo Se-jong, but the switch failed to change the flow of the game, as Mexico doubled their lead with a counterattack goal from striker Javier Hernandez in the 66th minute.

Son scored a goal in the stoppage time but Korea ran out of time to score an equalizer. With the loss, Korea remains the only team in Group F without a point. 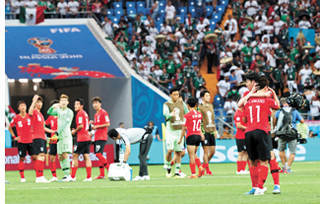 The Korean national football team reacts after their 2-1 loss against Mexico on Saturday. [YONHAP]

A draw or a win against Sweden in the match that followed could have automatically meant elimination from the group stage for Korea, but as Germany defeated Sweden 2-1, the team still has a slim chance at advancing to the next round.

“We’re not a strong team, so if we get a chance, we have to score,” Son said. “I should have done better as a forward.”

President Moon visited the stadium to cheer for the Korean national football team after a summit with Russian President Vladimir Putin in Moscow on Friday.

After the match, Moon visited the team’s locker room and encouraged them to keep playing their best until the end of the tournament.

“Our players did really well, but it’s sad that we lost,” Son said after the match. “The players quickly need to recover their mental strength. I hope we can show all our talent and play entertaining matches for fans. I’m really sorry but the players did their best. I want to thank fans for their support.”

Despite the loss, Korea still has a slim chance of advancing to the round of 16. To do so, Korea has to beat Germany by at least two goals and wait for the result of the Mexico versus Sweden match. In order for Korea to advance, Mexico has to beat Sweden by at least one goal.

However, Korea’s outlook for the final match doesn’t seem to be strong, as captain Ki Sung-yueng is uncertain whether he can compete. During the match against Mexico, Ki injured his left calf and was spotted walking on crutches after the game.

Ki’s injury is the latest in a series of ailments affecting the Korean squad’s key players. Defender Park Joo-ho concluded Korea’s first match against Sweden with a hamstring injury.

“We’ll do the absolute best we can in the final match, and our players will show the same type of determination and tenacity they did today,” Shin was quoted as saying. “These players threw their bodies all over the place for our fans, but we got a disappointing result. We have to live with the final score, and we will try not to disappoint the fans in the third match.”

Korea will play its final group match against defending champion Germany at Kazan Arena in Kazan, Russia, on Wednesday.