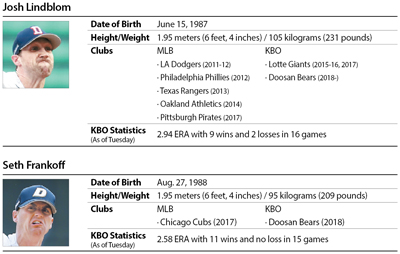 The Doosan Bears reign supreme in the Korea Baseball Organization (KBO) this season, with a solid 6.5-game lead over the runner-up Hanwha Eagles.

As of Tuesday, the Bears have won 50 games and lost 24, and behind their success are the team’s two American pitchers - Josh Lindblom and Seth Frankoff - who have managed to win 24 of the 31 games in which they started.

Lindblom, who is playing his fourth season in the KBO, is having his best yet - a 2.94 ERA with nine wins and two losses. The 31-year-old Indiana native made his KBO debut with the Lotte Giants in 2015 and is playing his first season with the Bears. During his career with the Giants, his season record was 13 wins, but with the Bears, he is well on pace to exceed that - he’s already won nine games before the halfway point of the season.

Lindblom got off to a slow start, giving up four runs in the Bears’ season opener against the Samsung Lions while pitching only four and one third of an inning, but after the game, he had 13 straight quality starts. In each of the games that Lindblom started in, he pitched more than six innings and helped the Bears minimize the usage of bullpen pitchers for the day. In 16 games that Lindblom started in this season, he has won nine games and lost two, with an ERA of 2.94.

The Bears’ other American pitcher, Frankoff, is pitching even better. In 15 games that he started in, the 29-year-old North Carolina native picked up 11 wins and no losses with a 2.58 ERA. Of the 28 pitchers that have fulfilled the required number of innings, Frankoff remains the only one to have a 1.000 winning percentage.

Aside from number of wins, Frankoff and Lindblom are ranked second and third in the league’s ERA, behind Henry Sosa of the LG Twins.

Frankoff has tossed about 17.5 pitches per inning. Compared to the league average of 16.5, it might seem like he’s pitching a lot, but his strength is his consistency. Looking at the games Frankoff started in this season, he has given up the least number of hits, an average of .181. In the KBO, Frankoff is the only pitcher to have his average below 1.000.

The two pitchers’ performances are infectious. When Lindblom and Frankoff start, the Bears’ batting lineup explodes, too. They’ve scored an average 4.1 runs per game this season, exceeding the league average of 3.75.

And when the two Americans start a game, the Bears’ winning percentage skyrockets to .774, far exceeding the runner-up in this category, the SK Wyverns, with .586. The KT Wiz, ranked last in this category, has only .385.

And compared to the Kia Tigers, who won both the regular season and Korean Series last year, the Bears’ percentage is even more impressive. Last season, the Tigers’ winning percentage with their two foreign pitchers - Hector Noesi and Pat Dean - was .567.