Korea on Monday unveiled the women’s football squad for the 2018 Asian Games in Indonesia, with its team headlined by Chelsea Ladies forward Ji So-yun. 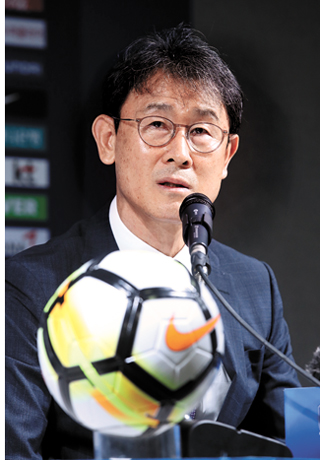 The Korea Football Association (KFA) released a 20-player roster for the Jakarta-Palembang Asian Games that included Ji and other veterans.

Seventeen of the 20 players competed at the Asian Football Confederation (AFC) Women’s Asian Cup in Jordan, where they finished fifth and qualified for the 2019 FIFA Women’s World Cup.

The women’s football competition at the Asian Games will be held from Aug. 16 to Aug. 30 with 11 teams. Korea, led by head coach Yoon Duk-yeo, is paired with hosts Indonesia, Chinese Taipei and the Maldives in Group A.

The Taeguk Ladies have yet to win a gold medal in women’s football at the Asian Games. They took bronze medals in the last two editions of the Asiad.

Yoon’s Asiad team includes key players like Ji, Korea’s all-time leading scorer with 45 goals in 103 caps, as well as Cho So-hyun, who has 112 appearances with Korea. Jeon Ga-eul, who has 35 goals in 91 matches, also made the list.

Yoon’s team will start training at the National Football Center in Paju, Gyeonggi, on July 30. They will travel to Indonesia on Aug. 13.

“Our goal is to change the color of the medal that we won at the Incheon Asian Games four years ago,” Yoon said. “We’ll try to meet the fans’ expectations.”

The Asian Games is not on the FIFA calendar, and clubs are not obligated to release their players. Yoon said the KFA had a good conversation with foreign clubs on releasing national players. Among the 20, four of them - Ji, Cho, Lee Min-a and Choi Ye-suel - play overseas.

“Four players will not join the national team in time,” Yoon said. “Lee and Choi, who play in Japan, will join the team on Aug. 6, while Ji will train with the team starting from Aug. 10. Cho will come to Indonesia on Aug. 20.”

Yoon said the humid and hot weather may influence their performance, but vowed that his players will overcome the difficulties.

“We have experienced players, like Ji and Cho, so I’m sure they’ll cope with the weather conditions,” he said. “Before our team is assembled, we have women’s football championship in the country, so we’ll first focus on recovering the players’ stamina.”

Yoon, who has been leading the team since 2013, said winning a gold medal will not be easy, but the players are motivated to win.

“Asian women’s football is at a high level, and I’m not going to say we’re certain to win the gold,” he said. “We’ll probably meet Japan in the semifinals and that would be the key match. We’re confident that if we can prepare thoroughly, we’ll have better results than what we had at the Incheon Asian Games.”