Korea finalized its roster for the LPGA Tour’s UL International Crown on Tuesday, and the country’s top female golfer is not on the team. 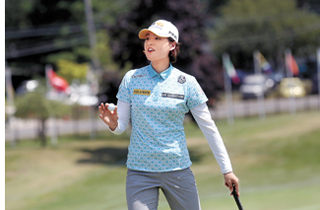 Chun In-gee smiles after sinking a putt during the second round of the LPGA Marathon Classic at Highland Meadows in Sylvania, Ohio, on July 13. [AP/YONHAP]

Park In-bee, the top-ranked golfer in the Rolex Women’s World Ranking, gave up her spot to allow a younger Korean golfer to compete at the event. Two-time LPGA major champion Chun In-gee will replace Park. With the addition of Chun, Park Sung-hyun, Kim In-kyung and Ryu So-yeon will represent Korea in October.

The UL International Crown will take place from Oct. 4 to 7 at Jack Nicklaus Golf Club Korea in Incheon. This is the first time it will be held in Korea.

The players competing at the UL International Crown were determined according to the world rankings released after the KPMG Women’s PGA Championship, which ended on July 1.

“It was my pleasure and honor to participate in the first UL International Crown in 2014 and at the 2016 Olympics, and I cannot describe in one word how amazing the atmosphere was to compete as a representative of my country,” Park In-bee was quoted by the LPGA. “There are so many gifted and talented players in Korea, and I thought it would be great if one of the other players was given the chance to experience the 2018 UL International Crown.”

Originally, Chun was scheduled to compete in the KLPGA’s major tournament, the Hite Jinro Championship, in October, as the liquor company is her sponsor. Instead, she will compete in the biennial event.

According to the tournament’s rules, if a player chooses not to compete at the event, her spot is given to the next highest-ranked golfer. Chun was given the chance after Choi Hye-jin, ranked 10th, and Ko Jin-young, ranked 17th, both decided not to join Team Korea for the UL International Crown. Chun is the seventh-highest ranked Korean golfer in the world ranking, at 19th.

“I am going to do my best to have myself ready and make contributions to Team Korea and to the success of the UL International Crown,” Chun said. “I am very grateful to UL and LPGA for this opportunity and especially to Hite Jinro for supporting my decision.”

Though Korea has had the highest-ranked team in the UL International Crown before, they’ve never won the event. Korea finished third in 2014 and second in 2016. Korea will enter the tournament as the top-seeded team.

The team will compete with the defending champions United States along with Japan, England, Australia, Thailand, Sweden and Chinese Taipei.