KFA asks Spurs if Son can come out to play

KFA asks Spurs if Son can come out to play

Korea is negotiating with Tottenham Hotspur over the release date of Son Heung-min for the upcoming Asian Games, a football official in Seoul said Thursday, hoping the star forward can join the national team as soon as possible. 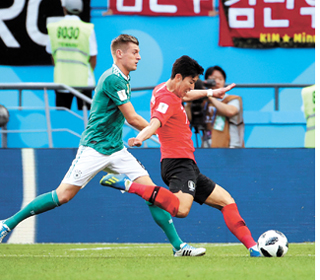 Son, 26, was named to Korea’s 20-man football squad for the 2018 Asian Games (Asiad) in Indonesia as one of the three overage players. The Asiad is open to men footballers aged 23 or under, but teams can field up to three players who are over the age limit.

Korea’s under-23 football coach Kim Hak-bum said Son will “definitely” play at the Asian Games, but he doesn’t know when the Spurs attacker will join his team. The Asiad is not on FIFA’s calendar, and clubs are not obligated to release their players.

Kim said Korea and Tottenham reached an agreement on the release of Son, but the two sides have not finalized the release period of the player.

“Including Son, we’re currently discussing the release period of Hwang Hee-chan of Red Bull Salzburg and Lee Seung-woo of Hellas Verona for the Asian Games with their respective clubs,” a official at the Korea Football Association (KFA) said. “We are hoping to finalize the discussion by this weekend.”

Son departed for London on Monday to join Tottenham’s preseason training. He is expected to take part in the English Premier League (EPL) club’s preseason tour in the United States.

Mauricio Pochettino’s side will fly to the United States on Sunday to compete at the International Champions Cup (ICC), a friendly football tournament that features 18 top-class European clubs. Tottenham is scheduled to play against AS Roma on July 26 and FC Barcelona three days later. They’ll wrap up the ICC with a match against AC Milan on Aug. 1 and will travel to Spain for a friendly match against Girona on Aug. 4.

If Son competes at the ICC, he won’t train with the Korean U-23 team from the start. Kim will call up his Asian Games players on July 31 at the National Training Center in Paju, north of Seoul.

However, if Son joins Kim’s team after the ICC, he’ll be able to work with his younger teammates through a friendly match before flying to Indonesia. Korea will play a friendly with the Iraq U-23 team on Aug. 9 and will go to Indonesia the next day.

If Tottenham decide to release Son after the EPL season opener, Son will have to join the national team in Indonesia. Tottenham will kick off their new EPL season with a match against Newcastle United on Aug. 11 on the road. They’ll then welcome Fulham on Aug. 18 at Wembley Stadium in London.

The men’s football tournament at the Asian Games is scheduled to be held from Aug. 14 to Sept. 1, but the competition period can start earlier with changes in the group stage draw.

The organizers said they will conduct a new draw after they omitted the United Arab Emirates and Palestine in the initial draw, which will now increase the number of participants in the men’s football competition at the Asian Games from 24 to 26.

Under the original schedule, the knockout stage of the men’s football competition starts Aug. 24. Son can join the national team if he plays in Tottenham’s first two EPL matches. However, if the London club plans to use Son until their match against Manchester United on Aug. 28, the forward can make his Asian Games debut starting from the semifinals.

For Son, this year’s Asian Games is important because it may be his last chance to earn military service exemption.

All healthy men between 18 and 35 must serve about two years in the armed forces. But athletes who either win an Asian Games gold medal or an Olympic medal of any color receive exemptions. They only have to undergo four weeks of basic training.

Son was not on the Korean team that won a bronze medal at the 2012 London Olympics and a gold medal at the 2014 Asian Games. He represented Korea at the 2016 Rio de Janeiro Olympics, but Korea suffered a quarterfinals exit.

For the 2014 Asian Games in Incheon, Korea asked Bayer Leverkusen, Son’s club at the time, to release the player, but the German outfit refused.