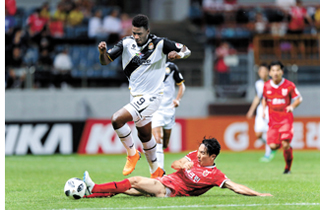 Brazilian striker Marcao of Gyeongnam FC competes for the ball during a match against Jeju United at Jeju World Cup Stadium on July 11. [K LEAGUE]

Serbian striker Uros Deric of Gangwon FC and Marcos Vinicius Amaral Alves, better known as Marcao, of Gyeongnam FC are competing for the title of top scorer in the K-League 1. In Gangwon’s victory over Jeju United 3-1 on Saturday, Deric played for only 23 minutes but managed to score two goals. Gangwon has not lost for seven consecutive games, taking two wins and five draws, and sits at fifth in the K League 1 ranking with 27 goals.

Deric came in to replace Jung Jo-gook in the 67th minute when the match was tied 1-1. In the 80th minute, Deric rushed towards the goal and headed a pass from Lee Hyun-sik into the net to put Gangwon up by one. Deric added another goal to his tally with a well-placed shot from outside the box in the 90th minute. With his 15th and 16th goals this season, Deric managed to continue his reign on top of the scoring charts.

Though the Serbian striker scored 11 goals in the first half of the season, he has not been in form recently. Deric could not score a goal against the stout Jeonnam Dragons defense on July 8, although he played all 90 minutes. Deric managed to sneak in a goal against Incheon United on July 11 but could not find the net against the Pohang Steelers on July 15.

“Because [Deric] has not been able to find space alongside Jung in a two-striker formation and because of his recent injuries, [he] has not played as well as [we] had expected,” said Gangwon FC manager Song Kyeong-seob.


Recently, Song has been trying to maximize Deric’s attacking ability by letting him play up front by himself. Since the change, Deric scored goals in both matches against Ulsan Hyundai FC on July 18 and Jeju United on July 21.

All of his goals decided the matches as they came after the 80th minute. For the first time in six years, Deric is on track to score over 30 goals in a season. Only Dejan Damjanovic, now of Suwon Samsung Bluewings, has scored more than 30 goals in the history of the K League 1. 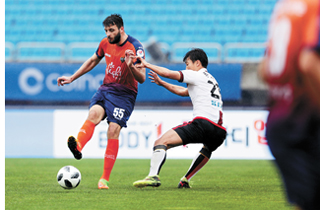 Serbian striker Uros Deric of Gangwon FC takes a shot during a match against FC Seoul at Chuncheon Songam Leports Town in Gangwon on May 12. [K LEAGUE

But Marcao is challenging Deric for the top scorer spot after returning from an injury. On the same day as Deric’s match against Jeju, Gyeongnam trailed Suwon 1-2 until Marcao tied the match in the 54th minute with a shot from the left side of the box, his 13th goal of the season.

At the start of the season, Marcao jumped in front of Deric in the goal count with a hat trick in the opening game, but fell behind later in the season after a groin ligament injury slowed him down. After bagging 10 goals in the first half of the season, Marcao returned to Brazil, where he received treatment for his injury.

In the first three games of the season’s second half, Marcao showed off his skills with two goals and an assist. Marcao is also a showman as well as a top goal-scorer.

The striker, who stands 1.96 meters (6 foot 5 inches) tall and weighs 100 kilograms (220 pounds), impressed the crowd with a 180-degree somersault after his equalizer against Suwon.

Last season, many Chinese clubs came calling for Marcao, but he decided to stay with Gyeongnam. He was the top scorer in the K League 2 with 22 goals, and led Gyeongnam to be promoted to the top-tier league.