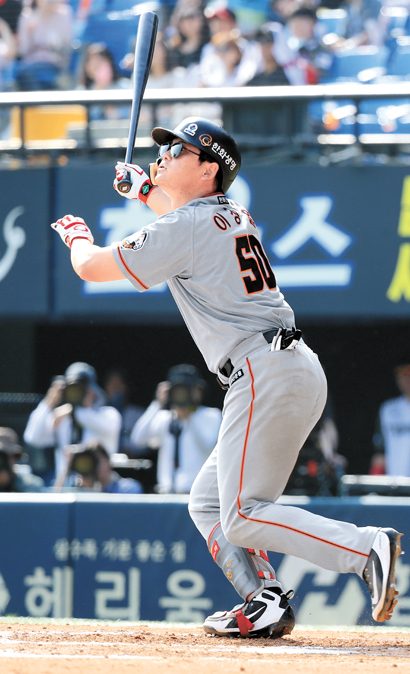 Lee Sung-yul of the Hanwha Eagles watches his two-run home run during a game against the LG Twins at Jamsil Baseball Stadium in southern Seoul on June 6. [YONHAP]

From curling star Kim Eun-jung to tennis wiz Chung Hyeon, athletes with glasses are making a name for themselves this year, drawing in legions of fans and boosting sales of their distinctive eyewear. Although the glasses sponsorship deals might have started landing on Hanwha Eagles batter Lee Sung-yul’s doorstep, his decision to don specs this season was all about saving his career.

Lee, who is in his 15th year in the KBO, is in the middle of his best season with 19 home runs as of Sunday. He has the second highest number of home runs for the Eagles, just edged out by Jared Hoying with 21, and is well on his way to hitting 28 home runs this season.

Lee’s success this season isn’t just personal - the Eagles are enjoying their best season in a decade. In fact, the Eagles have won 15 of the 18 games that Lee has hit home runs in.

“We had a lot of injured players but Sung-yul did really well,” said Han Yong-duk, manager of the Eagles.

In addition to the home runs, Lee’s accuracy has noticeably improved. Last season, Lee showed his ability as a long hitter, hitting 21 home runs in 81 games, but he wasn’t consistent. Of the KBO players that got in the batter’s box for more than 1,500 times last season, Lee topped the league in strikeouts, at 29.7 percent.

This season he is on track to his highest batting average ever, at .309 after 83 games as of Monday 6 p.m. Last season Lee pulled off a slightly lower average, at .307, but he only played in 81 games in the entire season.

“You can’t be a slugger just because you want to,” Lee said. “I set my goal as 20 home runs this season. Unlike Lee Yong-kyu, I wasn’t the kind of player who had the ability to keep myself in the batter’s box by cutting the ball count with fouls after two strikes. Once I started doing it a few times I gained confidence. Now I try to push the ball left.”

The biggest thing that’s changed is Lee’s new glasses. Due to astigmatism, he started wearing glasses in games this season. It may have felt unusual at first, but the new specs have definitely helped him spot the ball better and improve his statistics.

“I received LASIK eye surgery about 14 years ago but when I checked my prescription this season, it dropped to about .6 and I had astigmatism so I started wearing glasses,” Lee said. “Looking at the results this season, I think it was a good choice.”

Lee originally bought his own glasses but has since landed a sponsorship deal.

“I got two glasses for the game and a few more sponsored,” Lee said. “Since I’m wearing them to play better baseball, I don’t really feel uncomfortable.”

Lee may be making a name for himself now, but it’s been a very long journey.

Drafted by the LG Twins in 2003, Lee was originally a catcher. He switched to an outfielder shortly after, to focus on his batting. Lee wasn’t able to perform at the level the Twins were looking for and was traded midseason to the Doosan Bears in 2008.

Although things weren’t going well for Lee on the pitch, his move to the Heroes did bring him an unexpected - and perhaps unwanted - accolade. Lee is the only player to have ever played for all three Seoul-based clubs.

But that wasn’t the end of Lee’s journey. During his third season with the Heroes in 2015, he was traded to the Eagles. For the third time in his career, Lee was traded midseason.

“It felt different every time,” Lee said. “But when I came to Hanwha, it was a little difficult. My wife told me that this could be a good opportunity so I told myself to work hard, thinking that this could be my last chance. And it worked out well after coming to Hanwha.”

Mentally Lee’s lack of success took a toll. At one point he even considered throwing in the towel and returning to Suncheon, South Jeolla, to join his father on his farm.

“I came to Seoul because I wanted to be better, but I wasn’t,” Lee said. “So I started losing my desire to work hard. I considered going back home and helping my father. But I’m glad I went through all that and am still playing baseball.”

Lee, who started playing baseball in the fifth grade, still hasn’t achieved his longtime goal, of winning a championship title.

Throughout his 25 years of baseball, Lee’s team has never won a title, both in his amateur and professional careers. Lee has played for four different KBO teams but has only made it to the postseason once, while playing for the Heroes in 2014.

“I’ve spent 16 years as a professional and, including my career as an amateur, I haven’t won a title in 25 years,” Lee said. “When you play in the postseason, you get to see more baseball. I want to experience that with my teammates.”