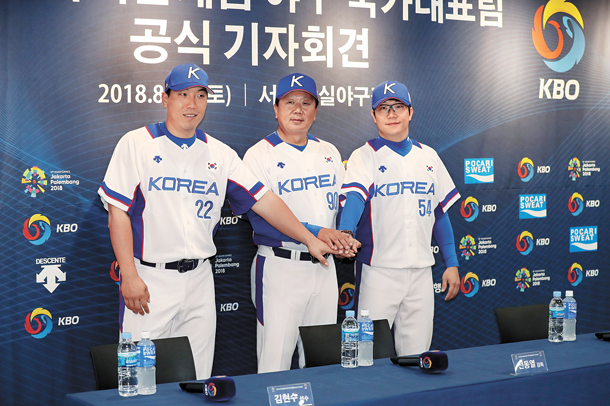 From left: Captain Kim Hyun-soo of the LG Twins, Korean manager Sun Dong-yol and Yang Hyeon-jong of the Kia Tigers pose in Seoul on Saturday. [YONHAP]

After two Asian Games, Yang Hyeon-jong of the Kia Tigers returns to the national team to defend the title for a third time, this time as the leader of the young pitchers.

Despite his long history with the Games, Yang doesn’t have a single bad memory from the Asiad. When he joined the team in 2010, Yang was the youngest member of the squad.

“I’m so glad to be on the national team. I’m just happy to play on the same with as the veterans,” Yang said when he was first selected eight years ago.

Yang had an impressive debut. He tossed a scoreless inning during a preliminary game against Hong Kong and gave up just one run in six innings during a semifinals game against China.

Four years later in Incheon, Yang led the pitching mound with Kim Kwang-hyun of the SK Wyverns. Yang led Korea to victory by tossing four scoreless innings against Taiwan in both the preliminary game and in the final.

While Kim Hyun-soo of the LG Twins and Park Byung-ho of the Nexen Heroes are the most experienced veterans in the batting lineup, Yang will lead the young starters all by himself. Kim Kwang-hyun is out with an elbow injury.

For the young pitchers, Yang is something of a role model.

“I want to learn everything [from] Hyeong-jong,” said Choi Won-tae of the Heroes.

The Korean team has six starters - Yang, Lee Yong-chan of the Doosan Bears, Park Jong-hoon of the Wyverns, Im Gi-yeong of the Tigers, Im Chan-kyu of the Twins and Choi.

“The starter in our first preliminary game against Taiwan will also start in the final game,” said Sun Dong-yol, manager of the Korean national team.

Though Sun didn’t announce the starter against Taiwan, it is very likely that Yang will be the one.

Yang had an unforgettable season in 2017, becoming the first domestic pitcher in the KBO in 22 years to pick up 20 wins. He led the Tigers to take both the pennant and championship titles and swept every MVP award.

Though the Tigers aren’t playing as well as they did last year, Yang is continuing his success, ranking first in ERA at 3.78, strikeouts at 133, quality starts at 15 and the most innings pitched at 157 among the league’s domestic pitchers.

The Korean national baseball team gathered at Jamsil Baseball Stadium in southern Seoul for their first training session on Saturday. Despite the heat, Sun chose Jamsil rather than Gocheok Sky Dome, the only indoor baseball stadium in Korea, so that players can adjust to the weather in Indonesia. Team Korea will be heading to Indonesia on Thursday.

“In Jakarta, they have to play in hot weather,” Sun said. “If it rains, I managed [the schedule] to train at Gocheok.”

At this year’s Asiad, a total of 10 countries will be competed for gold. Korea is assigned in Group A along with Taiwan, Indonesia and Hong Kong. Korea’s first game is against Taiwan on August 26. Though Taiwan is missing the majority of its foreign league players, they are considered to be Korea’s biggest threat at the Games.

Only the top two teams from each group will advance.

“I am excited,” Yang said. “When I saw the taeguk mark on the uniform, I was proud. Since I’m wearing a uniform with the taeguk mark, we will win a gold medal.”