When former Korean star catcher Lee Man-soo launched efforts to spread the gospel of baseball in Laos in December 2014, he said his goal was to take the Laotian national team to an international event. 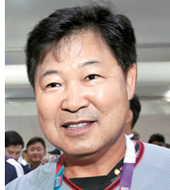 Nearly four years later in August 2018, Lee finds himself with the fledgling team at an international competition - the 18th Asian Games in Jakarta.

“Baseball is growing in popularity in Laos now, and if we can manage a victory here, it would lead to even bigger and better things,” Lee said Sunday on the sidelines of Laos’ practice at Gelora Bung Karno Baseball Field in Jakarta.

Lee was one of the best-hitting catchers in the 1980s in the Korea Baseball Organization (KBO). He’s famous for hitting the very first home run and hit in KBO history in 1982. Lee was also the first player to reach 100 and 200 career home runs and to win the batting Triple Crown as the league leader in home runs, RBI and batting average. Lee retired with 252 career home runs after 16 seasons.

In his post-playing career, Lee worked as a bullpen catcher for the Chicago White Sox during the 2005 World Series championship season and later managed the SK Wyverns in the KBO.

Now, the 59-year-old, as vice president of the Laos Baseball Association, is looking to make history for his new home. Laos will play Thailand on Tuesday and Sri Lanka Wednesday in the qualification round. The winner will join Japan, Pakistan and China in Group A.

Thailand and Sri Lanka are far from world-beaters in baseball, but they may as well be from Laos’ perspective. Laos only joined the World Baseball Softball Confederation a year ago.

“Thailand has been playing baseball for 48 years, and Sri Lanka has been at it for 24 years,” Lee said. “It’d be great if we can just manage to get one win.”

But Lee said his job isn’t just to help Laos win a few ball games. He wants his young players to dream of a better future - whether in baseball or otherwise.

“I took a few Laotian players to Korea in June, and we watched three KBO games together,” Lee said. “And they said they wanted to grow up to become professional ballplayers. I was so happy to see that.”

He said there are so many children in Laos wanting to play baseball now, but there aren’t enough instructors to accommodate all of them.

“No matter how great a school is, it’s no use unless you have teachers,” Lee said. “But I think better things will happen down the road.”