Don’t worry Spurs, you can have Son Heung-min back now

Don’t worry Spurs, you can have Son Heung-min back now 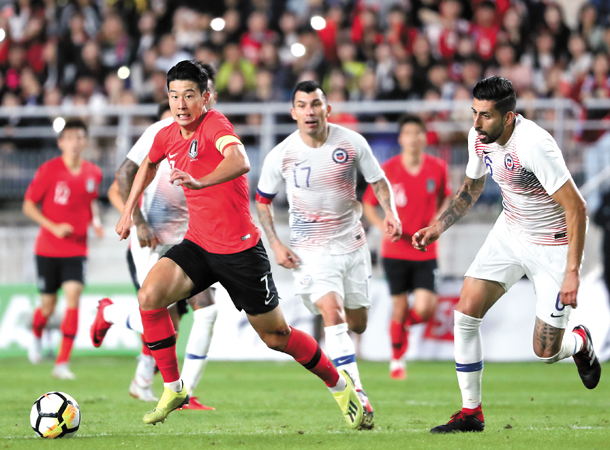 Son Heung-min, left, dribbles the ball during a friendly match against Chile at Suwon World Cup Stadium in Suwon, Gyeonggi, on Tuesday. [YONHAP]

Tottenham Hotspur forward Son Heung-min wrapped up his tight month-long schedule with Korea on Tuesday before returning to the English Premier League.

Son played full time in Korea’s 0-0 draw against Chile at Suwon World Cup Stadium in Suwon, Gyeonggi. It was his last match before returning to Tottenham for his club duty.

The friendly against Chile was Son’s eighth match in 26 days. After having a tight Asian Games with the under-23 side in Indonesia, where he played 524 minutes total in six matches over 16 days, Son returned home on Sept. 2. He then joined the senior team and played 83 minutes in a friendly match against Costa Rica on Friday before meeting the Chileans.

Including the 2018 FIFA World Cup and Tottenham’s preseason schedule, Son has gone through a hectic schedule without resting enough, which raises concerns about whether the 26-year-old can have a high-flying season in the English Premier League (EPL).

After playing in Tottenham’s 2017-18 season finale against Leicester City on May 13, he arrived in Korea to prepare for the 2018 World Cup in Russia. He played two friendlies - with Honduras and Bosnia and Herzegovina - at home and traveled to Korea’s pre-World Cup training camp in Austria, where he also appeared in tuneup matches against Bolivia and Senegal.

At the 2018 World Cup, he competed in all three of Korea’s group stage matches against Sweden, Mexico and Germany.

Son then returned to Korea and took about a 20-day rest before going back to Britain to join Tottenham’s new season training. In late July, he flew to the United States for the Spurs’ preseason campaign, the International Champions Cup.

Son returned to Britain in early August and played as a second-half substitute in Tottenham’s EPL season opener against Newcastle before taking a flight to Indonesia for the Asian Games.

After Tuesday’s match, Son said he felt perfectly fine and shrugged off concerns about his workload.

“I think this summer has been like any other summer, except that I’ve had to travel a little more,” Son said. “I always tend to play a lot [in the summers]. And I am not the only one playing heavy minutes. Guys like Hwang Ui-jo and Hwang Hee-chan also came back from the Asian Games, and they started tonight and played well. Fatigue is an excuse.”

Son bristled at the notion that he could have been forgiven for taking his foot off the pedal against Chile, since he’d already done so much for the national team.

“When I am playing for my country, there is not a single match that I can take lightly. I am a professional athlete,” Son said. “Especially with the big crowd [of over 40,000] that we had tonight, there’s absolutely no way I could even think about taking it easy. I may play poorly at times, but I’ll always try to give my best effort.”

Son will return to Tottenham with a big present for fans as he won a gold medal at the Asian Games and earned military service exemption. Before the Asian Games, Son signed a new contract with the Spurs that will run through 2023. Military exemption means he can continue his career with the Spurs without interruption.

Son will now have to fight for his spot on the Spurs. While he was busy with his international duty, Brazilian attacker Lucas Moura took his role and displayed impressive performance with the Spurs.

What could be more challenging to Son is that his club also faces a tight schedule ahead.

Tottenham, now sitting fifth on the league table, have no time to spare Son. The London club will face Liverpool on Saturday and will take on Internazionale in Milan, Italy, on Sept. 19 in UEFA Champions League action. They then have to play against Brighton & Hove Albion on Sept. 23 and Watford on Sept. 27 for the league cup competition.

Son said he isn’t daunted by what lies ahead, adding that he couldn’t wait to see his club teammates and coaches again.

“This is just the beginning,” Son said, when asked to comment on the end of his whirlwind stretch. “I miss my team. I am happy to be back playing in the Premier League and Champions League. Over the summer, I think I’ve learned a great deal about football.”