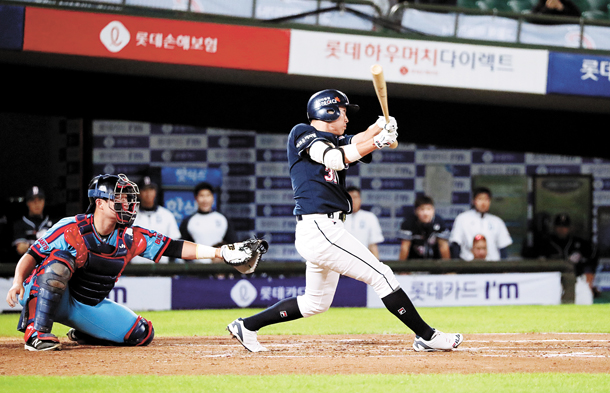 Jung Soo-bin of the Doosan Bears, right, hits a three-run home run during a game against the Lotte Giants at Sajik Baseball Stadium in Busan on Wednesday. [YONHAP]

Every September the KBO sees a sudden influx of players returning to the league after finishing two seasons in the military. The returning players return to their old teams where they normally fade into the background for the last few weeks of the season, unable to make an impact with such little time remaining. Jung Soo-bin of the Doosan Bears had different ideas.

Jung announced his return to the KBO on Wednesday with two back-to-back home runs against the Lotte Giants, leading the Bears to a 13-9 victory at Sajik Stadium in Busan.

As of 6 p.m. on Thursday, Jung has a batting average of .333 with two home runs and seven RBIs.

Jung, who returned to the Bears on Sept. 7, was quick to return to the mound, immediately being sent to center fielder as a replacement for Park Kun-woo, who is currently excluded from the roster due to a rib injury.

Despite expectations, Jung didn’t get off to a flying start. In his first game against the SK Wyverns on Sunday, Jung kept his bat silent. Then on Tuesday, against the Giants, he went one-for-five, adding a run and an RBI.

“My batting didn’t feel that bad,” Jung said. “I think I got nervous so my timing was bad and I swung even when it was a ball. I understood [the fans’] disappointment. Although I just started, I felt a lot of pressure.”

After two disappointing games, Jung finally stepped back into his old shoes. In fact, his two home runs in Wednesday’s game came as a shock to fans - Jung has only hit 17 home runs in his entire eight seasons in the KBO, and lightning has never struck his bat twice in one game.

“I got the pressure off and now I started to think that I just need to play baseball,” Jung said. “I know how it feels to hit a home run. I didn’t do a lot of strength training while in the military. I just had really good timing. I gained confidence from my first home run so I think it’ll affect me in a positive way the next time I’m at bat.”

In 2014 Jung finished the season with a .306 batting average and in 2015 he finished with a .295 batting average. Although they aren’t bad results, he still needed to make improvements in his batting.

As a result, he spent his two years in the military focusing on changing his swing.

“I don’t think there’s such a thing as a perfect swing,” Jung said. “I studied timing to make my best swing. I’ll continue to learn and listen to advice but that won’t change the basics of my swing. I’ve found my direction.”

Although Jung was a great asset to the Bears, it is still unclear whether he’ll continue to start. The Bears already have the strongest backup players in the KBO, especially in outfield.

“When I left for the military, our team wasn’t affected much,” Jung said. “We have a lot of good players. I have to compete against them and survive.”