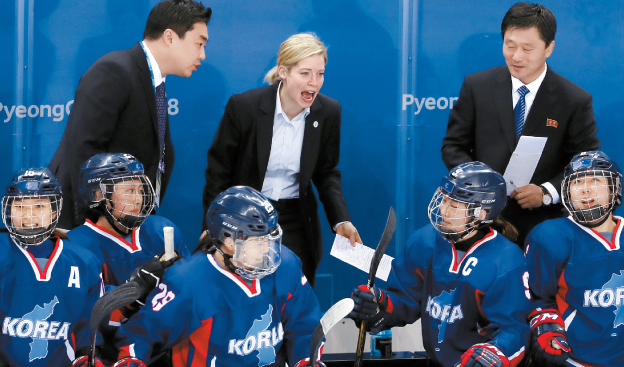 In this file photo from Feb. 14, Sarah Murray, behind, then head coach of the inter-Korean women’s hockey team, cheers after the team scored against Japan at the 2018 Winter Olympics at Kwandong Hockey Centre in Gangneung, Gangwon. [YONHAP]

The Korea Ice Hockey Association (KIHA) on Tuesday announced the coaching change on the women’s team, putting the national women’s under-18 boss Kim Sang-joon behind the senior team’s bench.

Kim replaced Murray, the Canadian coach who had been guiding Korea since 2014. Murray coached the unified Korean team — consisting of 23 South Koreans and 12 North Koreans — at the PyeongChang Winter Olympics in February this year.

Murray, daughter of the former National Hockey League head coach Andy Murray, was hailed by many for her leadership of the hastily-organized Olympic team. But according to informed sources, most Korean players expressed their dissatisfaction with their coach and threatened to sit out the International Ice Hockey Federation (IIHF) Women’s World Championship Division I Group B tournament in Asiago, Italy, in April if Murray continued to serve as coach.

The sources said 21 out of 23 players who participated in the Olympics signed a letter detailing their concerns and delivered it to the KIHA. In the letter, the players questioned Murray’s coaching abilities, leadership style, communication skills and her treatment of players.

At the world championship, assistant coach Kim Do-yun was listed as head coach and Murray was in Italy as general manager. She didn’t stand behind the bench during the competition, where Korea finished in second place.

Murray’s contract expired after the tournament, and the KIHA decided against renewing her deal.

Sources said Murray is now coaching a high school team in Minnesota and that the KIHA suspended players involved in the action from international play for six months.

On Murray’s watch, Korea earned its first-ever victory at the Asian Winter Games in February 2017, en route to a fourth-place finish. Then two months later, Korea won all five matches to capture the IIHF Women’s World Championship Division II Group A competition, and earned a promotion to the Division I and Group B event.