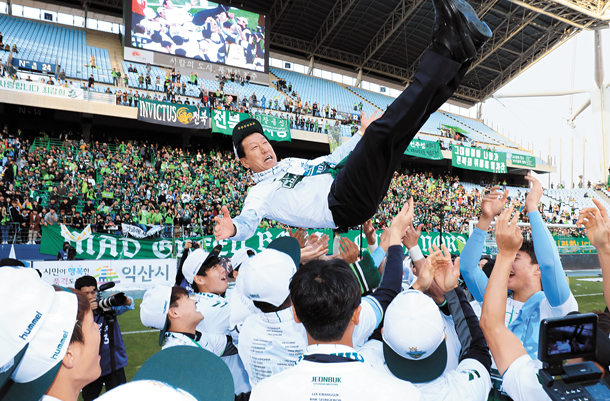 Rumors that Choi is being courted by Chinese clubs have been going around for years, but until now the top coach has repeatedly turned down the advances. This season, Choi has once again led Jeonbuk to dominate the K League 1, with the team locking in their regular season victory with six matches still remaining.

As of Wednesday, Jeonbuk has 24 wins, five draws and four losses, totaling 77 points - a good 19 points ahead of Gyeongnam FC in second place.

“Our contract with Choi is until 2020 but we decided to respect his decision to seek a new challenge,” said Jeonbuk in a statement.

Although Choi has already decided to leave Jeonbuk, he will still coach the team for the remaining five matches of the regular season.

Choi’s successful career in the K League is reflected in his new contract - Tianjin offered the coach an annual income of $7.5 million on a three-year contract.

In addition to Choi’s appointment, he is currently in talks to bring his coaching staff with him to the Chinese club. Prior to signing Choi, Tianjin hired Jeonbuk’s assistant coach Park Choong-gyun earlier this month.

“Jeonbuk is the team that allowed me to become who I am now,” Choi said. “I’m thankful to the fans and the club for cheering me on for the past 10 years. Although I may no longer be with the team physically, I will continue to cheer for Jeonbuk and forever cherish the memories I had with Jeonbuk.”

Since Choi became Jeonbuk’s manager in 2005, he has led the team to five K League titles and two AFC Champions League titles. When he took over the club was the bottom-ranked team in the league.

At the beginning of the 2008 season, Choi attempted a generational change, releasing most of the team’s older players, but it didn’t help much. Jeonbuk started that season with a win, a draw and four losses. Choi faced some harsh criticism from fans.

“I uploaded a handwritten letter on our club’s website asking fans to wait,” he recalled.

After the letter, the team saw some slight improvement with nine wins, two draws and three losses, good enough to make it to the playoffs.

But things really didn’t pick up until Lee Dong-gook joined Jeonbuk in 2009 as a striker. Many fans disapproved of Choi’s decision to sign Lee, but the manager eventually proved them wrong. Lee turned out to be one of the team’s greatest assets. That first season with Jeonbuk, he was the league’s top scorer, notching 20 goals in 27 matches, and Jeonbuk won the AFC Champions League that year.

With Lee’s ability to score goals and Choi’s assertive coaching style, Jeonbuk has become the league’s best team. Under Choi, Jeonbuk has won six K League 1 titles and two Asian Football Confederation Champions League titles. Not only that, Choi has won more games than any other manager in K League history, at 227.

While Choi has figured out what he’ll be doing next season, Jeonbuk is just starting their search for a new head coach and are hoping to find one by the end of November.

“Our selection process has just started,” said Baek Seung-kwon, general manager of Jeonbuk. “Choi will lead Jeonbuk until the last match of the season on Dec. 2, but we hope to find a new head coach before that.”

To minimize the confusion within the club and players, it is highly likely that Jeonbuk will appoint a new head coach before the end of November. In the club’s selection process, Baek said that they’re looking for a head coach with strong leadership.

“In addition to the domestic head coaches, we are also looking at foreign coaches,” Baek said.