While the SK Wyverns and the Doosan Bears are still competing for the Korean Series title, other teams are getting a head start on re-signing foreign players for the 2019 season. 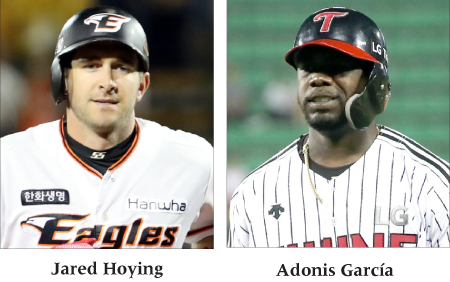 The Hanwha Eagles, who finished third in the regular season, have set their sights on retaining Jared Hoying. Since the beginning of the season, Hoying was the Eagles’ lead slugger. He had a batting average of .306 with 30 home runs and 110 RBIs in 142 games. Since Hoying signed with the Eagles for $700,000 last year, it is likely that his contract will jump up significantly.

While the Eagles saw success at bat, it is uncertain whether the club will retain its two pitchers. Keyvius Sampson picked up 13 wins and eight losses with a 4.68 ERA. Sampson led the league this season in strikeouts but showed unstable control over his pitches. David Hale, who joined the Eagles in July to replace Jason Wheeler, picked up three wins and four losses with a 4.34 ERA, but his simple rotation of pitches was a major weakness.

The Nexen Heroes, who advanced to the second round of the playoffs, are expected to keep all three of the team’s foreign players. The Heroes will very likely retain Jerry Sands, who joined the club toward the very end of the season. In 25 games, Sands had a .314 batting average with 12 home runs and 37 RBIs. More impressively, in 10 postseason games, Sands had a .315 batting average with three home runs and 11 RBIs. The fifth-ranked Kia Tigers are renewing their contract with pitcher Hector Noesi but parting ways with Pat Dean and Roger Bernadina. Noesi, who picked up 20 wins during the 2017 season, had a comparatively disappointing season this year, just with 11 wins, but manager Kim Ki-tai hasn’t lost his trust in Noesi.

The teams that finished in the lower half of league standings are also hoping to strengthen their roster, but a new KBO regulation on foreign players is expected to be another variable. Starting in the 2019 season, the KBO limited the contracts of new foreign players to $1 million a year. However, this regulation doesn’t apply if the team is renewing their contract with a player.

The sixth-ranked Samsung Lions will probably re-sign Darin Ruf. This season, Ruf was a key player on the Lions’ batting lineup, finishing with a .330 batting average, 125 RBIs and 33 home runs. However, the Lions didn’t see much success from its pitchers Tim Adleman and Lisalverto Bonilla, both of their ERAs exceeded 5.00. Although the Lions are hoping to sign a better pitcher, it is uncertain whether they can due to the KBO’s new regulation over contract limits.

Under new manager Yang Sang-moon, the Lotte Giants will also likely to replace all of its foreign players. As the Giants released its foreign pitcher Felix Doubront during the season, the team went through last few weeks of the regular season with only one foreign pitcher in its starting rotation. Although Brooks Raley, who played four seasons with the Giants, picked up 11 wins and 13 losses this season, he had a disappointing 4.74 ERA. Infielder Andrew Burns showed weakness in defense this season with 22 errors, the second-most in the league.

The LG Twins, who finished the regular season in eighth place, parted with its third baseman Adonis Garcia, as he missed the majority of the season due to minor injuries. However, the Twins plan on renewing their contract with its two foreign pitchers Henry Sosa and Tyler Wilson.

The KT Wiz are very likely to retain Mel Rojas Jr., who hit 43 home runs this season, but they aren’t sure whether to renew their contract with Dustin Nippert or Ryan Feierabend. The NC Dinos, who finished in last place for the first time since they joined the KBO in 2013, are likely to replace all three of the team’s foreign players.