Ryu Hyun-jin to stay at Dodgers for 1 more year

Ryu Hyun-jin to stay at Dodgers for 1 more year 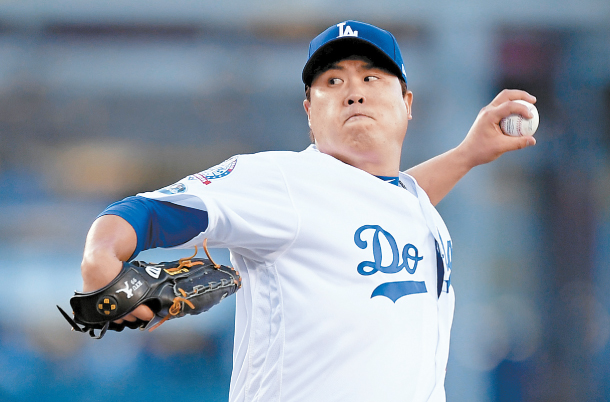 Korean free agent pitcher Ryu Hyun-jin has accepted the qualifying offer from the Los Angeles Dodgers, opting to stay with the club for one more year after six seasons together instead of testing the open market.

The Major League Baseball Players Association said Monday that Ryu decided to accept the one-year offer worth $17.9 million — the mean salary of the 125 highest-paid players. The deadline to accept or reject the offer fell at 5 p.m. Monday, or 7 a.m. Tuesday in Seoul.

The left-hander had 10 days to decide. If Ryu declined the deal, he would have been free to negotiate with any team, including the Dodgers, for a new deal. And a team that signed Ryu away from the Dodgers would’ve had to give his previous club a compensatory draft pick in 2019.

Ryu has played for the Dodgers since 2013 on a six-year, $36 million contract, following seven outstanding seasons in the KBO with the Hanwha Eagles.

Ryu was the first Korean player to make the jump from the KBO to the majors via posting.

In 2018, Ryu went 7-3 with a 1.97 ERA in 15 starts, recording 89 strikeouts in 82 and one-third innings. He spent three months on the disabled list with a groin injury but had a strong finish to the season to earn a spot on the Dodgers’ postseason rotation.

Ryu had an up-and-down postseason. He started Game 1 of the National League Division Series (NLDS) against the Atlanta Braves and struck out eight over seven shutout innings in the Dodgers’ 6-0 victory.

But Ryu had a couple of mediocre outings in the NL Championship Series against the Milwaukee Brewers, allowing seven earned runs in seven and one-third innings combined.

Ryu made history by becoming the first Korean to start a World Series game when he went up against the Boston Red Sox at Fenway Park in Game 2.

He was the losing pitcher in the Dodgers’ 4-2 defeat after getting charged with four earned runs in four and two-thirds innings. Ryu never had another chance to start, as the Dodgers bowed out in five games.

Ryu will be 32 next year and given his history of injuries, the $17.9 million qualifying offer was likely much higher than what he would have commanded annually in free agency.

And by accepting this offer, Ryu bet on himself that he can have another strong season in 2019 and increase his value before hitting the open market next winter.