Can Chung Hyeon do it again?

Can Chung Hyeon do it again? 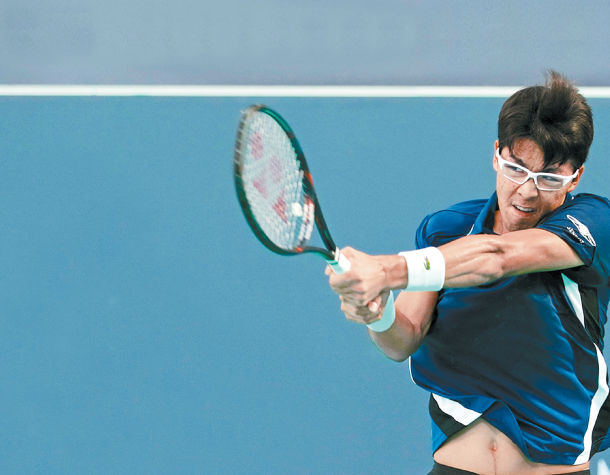 Chung Hyeon returns the ball during his match against Kevin Anderson of South Africa at the 2018 Mubadala World Tennis Championship in Abu Dhabi, the United Arab Emirates (UAE), on Dec. 28 last year. [XINHUA/YONHAP]

Korean tennis star Chung Hyeon will return to the court at the 2019 Australian Open, the tournament that brought him international fame last year, tomorrow.

Chung, seeded 24th at the tournament, will be the only Korean player to compete in the first Grand Slam tournament of the year.

Chung, currently 25th in the world ranking, will face No. 76 Bradley Klahn of the United States. The two players have never played each other before.

If world rankings are to be believed, Chung’s first round match should be an easy one. The highest ranking Klahn has ever reached is No. 63 in 2014, Chung, by comparison, hit No. 19 in April last year. Klahn has never won an ATP World Tour event but has picked up seven victories on the Challenger Tour, the second tier in the ATP.

In Grand Slam tournaments, Klahn’s best finish was in the second round at Wimbledon and the U.S. Open, but at the Australian Open he has never advanced past the first round.

Once Chung advances to the second round, he’ll play against the winner of the first round match between No. 48 Sam Querrey of the United States and No. 53 Pierre-Hugues Herbert of France. As both players are not seeded in the tournament, Chung is expected to have an easy path to the third round.

If Chung does make it to the third round — and considering the injury-prone year he’s had, that remains a big if — he will face more of a challenge. The most likely players to make it to the third round match with Chung are Nick Kyrgios of Australia or Milos Raonic of Canada. Although Kyrgios enters the Australian Open at No. 51 in the world ranking, he has four career titles and reached No. 13 in 2016. Raonic enters the tournament at No. 17 in the world ranked and is seeded 16th at the Australian Open.

Kyrgios and Raonic will face each other in the first round, with the winner of that match facing an easy second round matchup in either No. 59 Stan Wawrinka of Switzerland or No. 83 Ernests Gulbis of Latvia.

If Chung is able to make it through the third round he will face a tough road, likely coming up against world No. 4 Alexander Zverev of Germany in the fourth round.

If he continues to progress, he could come up against world No. 1 Novak Djokovic, who he famously defeated at the Australian Open last year, in the semifinals. Chung and world No. 3 Roger Federer, who knocked him out of the tournament last year, are playing in different brackets and cannot meet before the final.

Chung has won one ATP World Tour victory in his career, the 2017 Next Generation ATP Finals, in Italy. By winning his first ATP Tour title, Chung became the first Korean tennis player since Lee Hyung-taik at the Adidas International Tour in January 2003 to win an ATP Tour event.

That was the start of Chung’s sudden rise to prominence in the world of tennis, a sport with very little following in Korea.

Last year, Chung, then ranked 58th in the world, made it to the semifinals at the Australian Open. He first shocked the tennis world by defeating Djokovic in straight sets in the round of 16 and then went on to beat Tennys Sandgren of the United States in straight sets in the quarterfinals, becoming the first Korean to advance to the semifinals at a Grand Slam tournament.

Against Federer in the semifinal, Chung withdrew during the second set due to pain caused by blisters.

Following his success at the Australian Open, Chung continued a strong season by reaching the quarterfinals at six consecutive tournaments, starting with the ASB Classic in New Zealand in January. By April he was No. 19 and officially became the most successful Korean tennis player of all time.

Chung is off to a less impressive start this year. In the two tournaments he has already competed in this month — the Maharashtra Open (which began in December but ran into January) and the Auckland Open — Chung had early exits, losing in the first round. In both matches Chung allowed come-from-behind victories.

Chung is known as “The Professor” due to his distinctive white-framed glasses. His eyesight is actually the reason he started playing tennis — at age six, a doctor recommended he focus on the color green to help limit the effect of his astigmatism — his family felt that tennis was the best option.