Son is back on form. For Spurs.

Son is back on form. For Spurs. 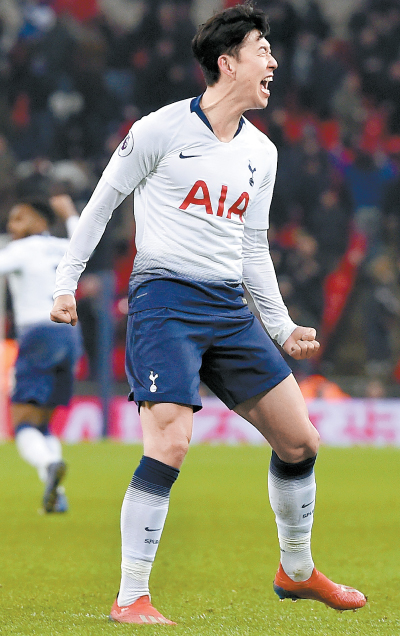 Son Heung-min of Tottenham Hotspur celebrates after scoring an equalizer against Watford at Wembley Stadium on Wednesday. [EPA/YONHAP]

It was Watford that took the lead at the beginning of the match, with Craig Cathcart’s scoring in the 38th minute. Right when it seemed as though Spurs was looking at a shutout loss, Son finally broke the silence by scoring an equalizer in the 80th minute. Continuing the momentum, Fernando Llorente added another in the 87th to allow Spurs to take a come-from-behind victory.

“I’m very happy to score again in this shirt and to get three points is even better,” Son said to Spurs TV after the match. “I love to be back here, to see the fans, my teammates and the win means so much to me.”

With the win, Spurs are now third in the EPL standing with 18 wins and six losses, totaling 54 points. For Son, this is his 13th goal of the season - nine from league matches and four from Cup matches.

“It’s a massive win,” head coach Mauricio Pochettino was quoted as saying on Hotspur website. “A massive victory in the way that we won the game in the second half, believe always. I think we fully deserved it. I’m so happy because we needed to start to feel victory again and three points are so important to keep us in a very good position in the table.”

Son’s goal is receiving even more spotlight both from Korean and European football fans as this was his first match after returning from the Asian Cup. As Korea suffered a disappointing 1-0 loss to Qatar during the quarterfinals match Friday, Son returned to his English club earlier than expected.

When Son arrived in the United Arab Emirates (UAE) just on time for Korea’s final group match against China, he was given no break as the Taeguk Warriors were missing key players due to injuries. Son played all three matches after he joined the team - against China, Bahrain and Qatar - at the Asian Cup.

Although Son mentioned he was tired, he successfully led Korea to a 2-0 victory against China. However, starting in the knockout stages, Son’s performance seemed to lag and he appeared to be struggling due to his tough schedule.

Thanks to Korea’s early exit, he was able to join Spurs earlier than expected, on Saturday, but once again he was given no break before taking to the field for his Premier League club.

During Son’s absence, Spurs played three matches and lost two. Its loss against Crystal Palace Monday has led the club to be eliminated from the FA Cup.

His absence was even more crucial as the club is missing its key players - Harry Kane and Dele Alli - due to injury.

“Of course he was disappointed to lose the quarterfinal against Qatar - he wanted to deliver his best for his country and win the Asian Cup,” Pochettino was quoted as saying on ESPN. “But in the same time I need to be honest - I’m happy he’s back because he’s helping us to try and win and that is so important.”

Spurs will play their next Premier League match against Newcastle Saturday at 9 p.m., Korea time. As Spurs will still be short some of its key players, Son is unlikely to get much rest over the next few weeks.

“He finished very tired, with some cramp,” Pochettino was quoted as saying on ESPN. “We’re going to see if he can recover for the next game. If he’s OK maybe he’s going to be in the starting XI - if not, on the bench. He showed energy and I’m so happy with his performance, but more happy because he showed massive commitment with the team.”